Agriculture the main focus of the new Innovation Centre 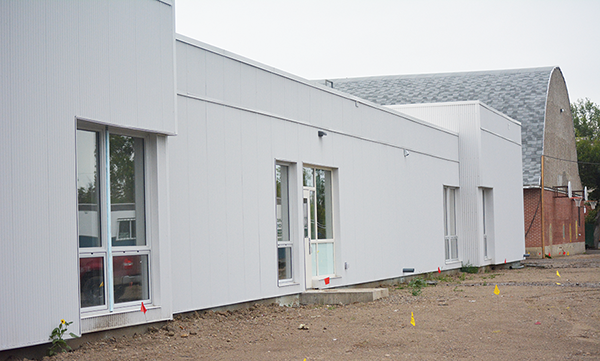 The standalone Career and Technology Studies facility in Magrath is set to open in the fall and the centre of focus of what’s happening inside is agriculture.

The Town of Magrath and Westwind School Division in collaboration with representatives from leading agriculture corporations, the University of Lethbridge and Lethbridge College, have formed the Sustainable Agriculture Education Partnership and will be developing a curriculum module based around agriculture.

High school students could get college credits by courses they have taken at the facility.

Adults have the opportunity as well to higher their education by getting technical training and obtaining college credits.

Wade Alston, CAO for the Town of Magrath, believes there is a problem in Southern Alberta when it comes to young people and farming and expects the new facility to change that.

“Kids don’t want to go back to the farm because the model isn’t attractive to them. We want to give them a vision of a different way of doing agriculture in this area. It’s important to capture the value here, while creating more jobs along with vitalizing and building rural communities,” said Alston.

He suggests the struggles are apparent on this side of the world in comparison to other countries and people here aren’t as attuned to the future of agriculture as much they should be.

“There’s a level of diversification and of innovation in the business of agriculture and the science of agriculture that’s happening in Europe and not happening here in North America. Young people over there are excited about careers in these sectors. Over here, there is a bit of a gap in our thinking,” said Alston.

Magrath has a rich history in agriculture.

In terms of irrigation, Magrath has been known as the irrigation capital of Canada.

At one point, Magrath had a large food processing industry that marketed canned vegetables, they were also a leader in livestock feeding and played a big role in the sheep industry.

“Magrath was founded as an agricultural centred community from an economic perspective. Magrath has been a real leader in many regards to the economic diversification in the Ag sector, historically,” said Alston.

Alston believes this project will once again take Magrath back to being a leader in agriculture.

“We wanted to bring that vision back and try to get young people interested in careers in agriculture along with providing them the opportunity in high school to learn about the science of these things. Such as robotics, GPS systems and drone technology,” said Alston.

The new curriculum is being funded through Agrium, with the desire to get other Ag cooperations on board once they get a feel for what’s being accomplished through the program.

It is expected that this Magrath-based project will help act as a model for similar initiatives throughout Western Canada and eventually on a global spectrum.

The cost of the standalone Career and Technology Studies facility was paid for by the Town of Magrath and Cardston County with the help of government grants and will be a welcomed addition to the community.