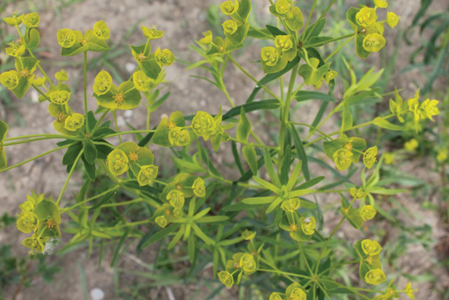 While it may be the time of year to start planting, don’t forget to keep an eye out for those plants that don’t belong there as well.
Ultimately, when in doubt, look it up.

“There is a lot of identification resources for the general public.Those include the Alberta Invasive Plant Identification guide, which is a free download online,” said Megan Evans, executive director of the Alberta Invasive Species Council. “There is also an app that can help you with plant identification as well, including our EDDMaps Alberta app. So that’s an app where you can record observations of invasive species, and it doesn’t matter what kind of invasive species they are, we have them all listed, including fish, plant, pigs, you name it, they’re all on there.”

Launched in 2012, the free download has a plant identification resource that allows you to enter characteristics of the plant in order to identify it. It was originally designed for early detection and rapid response, and when you use the app to submit sightings, the information is sent to the AISC, to an expert identify ensures that you’ve made the correct identification, and informs local authorities on the infestation.

“So if you’re looking at a plant that you’re not familiar with, and it has blue petals, you would enter that in and the app would narrow it down to the invasive plants that we have in Alberta that has blue petals. So it’s a really good starting point for those who are not super familiar with the invasive plants we have in southern Alberta, in Alberta in general,” said Evans. “(The identification component) was developed by the City of Edmonton, it’s a really good component, and it’s a really strong identification resource.”

Some of the common plant invasive species in southern Alberta are leafy spurge, knapweed, oxeye daisy and Canada thistle. One of the newer ones are phragmites, a tall weed-like grass that can be found in wetland areas that was first spotted in Alberta in 2016.

Evans cautioned that if you discovered an invasive plant, you shouldn’t just pull it it, as different species need to be controlled in different ways. Additionally, depending on the life stage of a plant, it would need to be treated differently.

“Understanding if you’ve got a plant that spreads only by seed, and it’s highly effective to be controlled by pulling the plant out, removing that seed course, and understanding what you’re dealing with is really, really important.”

Additionally, people can react differently to different plants. One of the worst case scenarios would be something like with giant hogweed, an invasive plant that hasn’t been spotted in Alberta yet, which made headlines a few years ago when people who came in contact with it’s sap suffered burns when exposed to light.

“People react to plants differently,” said Evans. “What I would say is always wear gloves, you want to make sure that you’re protecting yourself. We do have some known species like giant hogweed, which is not current present in Alberta, that can definitely have impacts such as burning skin and those type of things.”

Just because it’s not in Alberta yet, doesn’t mean you don’t need to be vigilant about it. Noting there is about 13 species of hogweed, four of which are in Alberta, Evans says that once they get into Alberta they can spread very quickly and become difficult to deal it. Invasive species such as St. John’s Wort are prominent in neighbouring jurisdictions, and they want to make sure they don’t take hold in Alberta.

Evans recommends the clean-drain-dry method with watercraft, and the play-clean-go method, the idea that you come clean and leave clean to ensure you don’t bring dirt and potential invasive species with you.

“There is a lot of everyday things people can do to help prevent the introduction and spreads of invasive species,” said Evans. “It’s always easier to implement early detection and rapid response. So if you only have one invasive plant species or one infestation, I would say get one that, eradicate that using whatever means available, and then you’ve prevented a potential larger infestation from occurring. Once we let weeds or invasive species get out of hand, it’s incredibly costly to try and control them, and that’s when we also see the impacts of their infestation as well. So that cost double, both in our effort to control them as well as their impacts to native plant communities and impacts to crop yields and those sorts of things.”

For more information about invasive species and how to control them, visit https://abinvasives.ca.