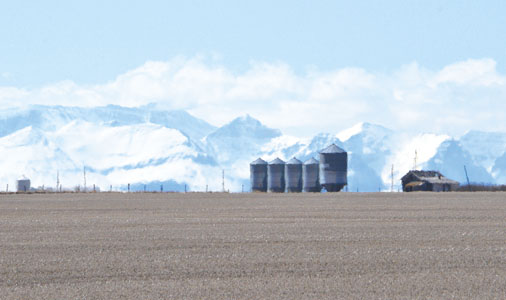 Parts of southern Alberta along the Milk River could begin to run dry after a massive water transportation structure on the U.S. side of the border collapsed and failed over the May long weekend.

“The diversion from the St. Mary Canal to the Milk River has a series of five drops which move water to the North Fork of the Milk River,” said Tim Romanow, executive director of the Milk River Watershed Council. “And the final drop structure (south of Whiskey Gap), which is approximately 260 feet in length and has a 58-foot vertical drop, failed on the May long weekend.”

With the collapse of the “Drop 5” structure no water from the St. Mary River can be diverted into the Milk River. Romanow explains why this is a major problem.

“Up to 80 per cent on an average year of the Milk River flow is actually made up of St. Mary’s diversion water,” he says. “Our water users are reliant on that, our municipalities, our irrigators, and right now there is approximately 8,600 acres of irrigation on the Milk River that would be reliant on this.”

Communities affected on the Canadian side of the border include the Town of Milk River and the Village of Coutts. On the U.S. side of the border all High Line communities are affected including the Village of Sweetgrass, the City of Havre and water users in the Malta and Glasgow areas.
With the Milk River reduced to its natural flow only, water users are already noticing a difference in the amount of water running through the watershed, said Romanow, and it will only get worse in the weeks ahead as spring run-off and ground water from recent rains dry up.

“Right now we are at natural flow only,” confirmed Romanow. “So there is no additional diversion water coming in. That last time I checked we were sitting between six and nine cubic metres per second. Normally with the diversion water in…we would be between 16 and 18 cubic metres per second. Right now we are at about half what it should be, and it is going to drop more in the next couple weeks (after runoff).”

U.S. Bureau of Reclamation engineers have been making their assessments on the extent of the damage, said Jack Conner, administrative officer for the Bureau of Reclamation’s Montana office. However the challenge was getting crews on site in the remote location with the rainy weather.

“Our engineers are in their heavy assessment phase of all the different facets of trying to not only gain access, because there is a four-mile dirt road into that location that when the weather is bad is pretty unstable,” he confirms. “And then, of course, we have teams coming in from Denver and other locations to assess the damage to the drop, and what it is going to take to repair the cement structure. Then there is the gravel bed below that cement structure, and where the material is even going to come from. That’s a pretty big issue as remote as the country is up there – they are trying to figure out where the gravel material is going to come from for the road as well as the bed of the canal.”

Conner recognizes there is a sense of urgency surrounding the project on both sides of the border.

“The biggest concern is the effect to water users,” he confirms, “and our engineers are trying to figure out the availability of water as far as the different sources that flow into the Milk River. That’s another big issue: what are the impacts as this structure is being shut down for repairs into the future. Obviously communication will be key.”

“We are working with local county commissioners, water-user groups, municipalities and other interested stakeholders to ensure they are included in what we are up to, and what our plans are.”

Mayor Peggy Losey of Milk River says her community would be more concerned if it takes a prolonged period to enact repairs on the U.S. side of the border, but the Town has a good water reserve at the moment.

“At this point with the flow high, we’re trying to keep all our water storage full and topped off,” she says. “We have already asked our citizens to voluntarily conserve water whenever possible. And if we have to put in water restrictions, we will.”

Losey estimates the Town has three months worth of reserve supply, but also recognizes the community is completely dependent on the river for its drinking water.

“The concern would be a possible water shortage,” she states. “We are prepared to introduce water restrictions if it is necessary. We do have water storage for three months so hopefully this will get fixed before that. But, it looks pretty bad, and we don’t know.”

Mayor of the Village of Coutts, Jim Willett, says his community, which receives its own supply from the Town of Milk River, is prepared to work in coordination with the Town to bring in joint water-use restrictions if that becomes necessary. He is hopeful it won’t be necessary, or they won’t be too prolonged if they are imposed.

“We are not alone, of course, in needing water off of this river because the City of Havre in Montana also gets their water from the river as do a lot of upstream farms and so on require it for irrigation; so there is quite a bit of pressure I would think on the Bureau of Reclamation to get something going so the water gets to flowing again,” Willett says.

The 100-year-old St. Mary Canal drop system into the basin has been of concern for a number of years for Milk River irrigators and water users in his area and south of the border, agrees Romanow.

“This is an over 100-year-old structure that needed some attention and has been put on the burner for awhile,” he explains. “There is definitely an infrastructure deficit that needs to be addressed. It’s an area we have identified as a water security concern for a number of years, and hopefully some positive comes out of this and we either get really innovative in terms of our use efficiency, or if we can help support finding some long-term solutions to our water security challenges.”