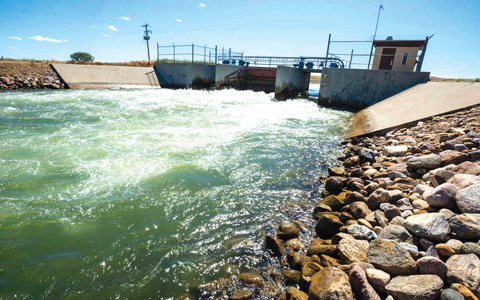 Water from the SMRID main canal flows through the Horsefly Check Structure above the Taber Irrigation District’s Horsefly Reservoir Tuesday after Minister of Infrastructure Prasad Panda announced $35 million in water and irrigation projects in the region. ALTA NEWSPAPER GROUP PHOTO BY IAN MARTENS

The Alberta government announced over $40 million in grants on Tuesday for irrigation and water management in southern Alberta, including major announcements in the Taber and Raymond area.

Minister of Infrastructure Prasad Panda said the money provided for the projects through federal-provincial matching grants is part of his government’s ongoing efforts to help stimulate the economy coming out of the COVID-19 pandemic and foster economic growth in the region.

“This is part of our Alberta recovery program,” he explained to the media at the formal announcement in front of Taber’s town hall on Tuesday. “As you all know, we mean to respond to this pandemic. We have a very bold plan to mitigate some of the risks for the health and the economy for Albertans.”

Panda then outlined four projects, three of which were in the Taber area, which would be funded by the Alberta government in the southern Alberta region. The major announcement was a $22.2-million grant to help mitigate flooding risks in the St. Mary River Canal through upgrades to the Horsefly Emergency Spillway.

According to information released by the MD of Taber after the announcement, the project will divert the equivalent of the entire flow of the SMRID main canal upstream of the Horsefly Check Structure through the Taber Irrigation District (TID). During a large event, water would be diverted through an SMRID main canal diversion structure into an enlarged Horsefly Approach Channel, through TID’s Horsefly Reservoir, an enlarged TID lateral 15, through Taber Reservoir, into an enlarged TID Big Bend Main Canal and then through a new diversion and channel west to a spillway to the Oldman River. TID would own and operate the system under a mutually agreed operation, maintenance and surveillance plan.

“The reason this is such a big project for us about two years ago in the spring of 2018 we had an awful lot of overland flooding,” explained Reeve Merrill Harris of the MD of Taber. “Down south of Grassy Lake, the possibility of the St. Mary Canal breaking due to all the water and the ice that was in there. What would happen to our area if that canal was to ever break? This project diverts water out of the St. Mary Canal through Horsefly Lake, through Taber Lake, and down to the river. So more drainage water can be picked up farther down east without that chance of that main canal breaking. So that is huge for irrigated agriculture in our area: to safeguard that main canal through that project.”

Panda also announced an $8-million grant for the Town of Raymond to enhance its municipal water system.

The Town of Taber also was able to receive two grants.

The first one, for about $500,000, was to help clean corrosion from the community’s water infrastructure through CO-2 injections which will help improve overall water quality in the community.

The second, more substantial, grant for $7.5 million was to fund the Taber East Constructed Wetland project. Stormwater generated within the southerly and easterly areas of the Town flow by municipal drainage networks to the TID Taber Reservoir. According to information provided, this impacts water quality and exacerbates issues managing an irrigation network during overland runoff events.

The project involves incorporating settlement and storage ponds to collect stormwater that will discharge through a wetland engineered to filter and extract nutrients from the water prior to controlled release into TID’s Taber Reservoir.

Taber Mayor Andrew Prokop said his community was grateful for the government’s support on both projects.

“We are thrilled about these projects today,” he said. “That does nothing but enhance the area, the quality of life, and future longevity for the Taber community area. That (wetland project) has been in the works for awhile. What prompted that was to be able to treat water to go back into Taber Lake, which in turn can be used for irrigation purposes. That is a huge enhancement.”

“This project is also very environmentally friendly as it will create new wildlife habitat and be userfriendly and educational for all to enjoy for many years ahead,” Prokop added.

Agriculture Minister Devon Dreeshan made another announcement on Tuesday of a $2.6-million grant to the St. Mary River Irrigation District to repair irrigation infrastructure in southern Alberta.

Taber-Warner MLA and Associate Minister for Red Tape Reduction Grant Hunter said all the announcements on Tuesday, and other recent infrastructure announcements such as the $150 million for Highway 3 twinning between Taber and Burdett, show his government’s commitment to enhancing agriculture in the region.

“We have something special here,” he said. “There is something unique and magical about this area. We have got the heat units. We have got the water. What we need to have is the infrastructure so we can get out of the way of our job creators and the first innovators, which were the farmers, they will do what we need them to do. We have been talking about getting Albertans back to work. This is going to start with that. Irrigation is going to be playing a huge part in our major strategy down here – which is building a world-class agri-food business. All of these (irrigation) projects down here are going to be able to help with that.”