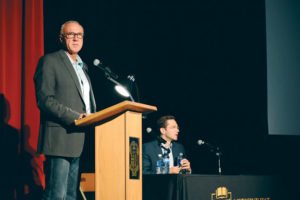 Canada’s Conservative leader Erin O’Toole says it’s hard to believe that anyone would look at the carnage caused by COVID-19 and see an opportunity.

It’s even harder to believe that is the right time for an agenda that will create even more uncertainty.

Yet, Justin Trudeau has openly proposed that now is the time to implement a massive and risky experiment to remake our economy.

Trudeau remarked, during a video speech to the UN General Assembly, backing up his globalist ideology. He clearly stated, “This pandemic has provided an opportunity for a reset. This is our chance to accelerate our pre-pandemic efforts to re-imagine economic systems that actually address global challenges like extreme poverty, inequality and climate change.” Opportunity for reset? Re-imagine economic systems? Right now? Smack in the middle of a pandemic? What Trudeau delusionally describes as an opportunity, most Canadians see as narcissistic opportunism.

Canada’s Prime Minister and his minority government have no mandate to ‘reimagine’ our economy, especially given their record on endless debt and deficits.

Trudeau continues his focus on saving the world by giving away hundreds of millions of the financial resources that should be directed at Canada and fighting for our economic recovery.

‘The Great Reset’, a UN program under the World Economic Forum, is aimed at reshaping views on the global economy, through environmental means, to embrace socialism. This philosophy coincides with Trudeau’s unwavering affinity for big government, enhancing all methods of social programs with middle-class tax dollars, destruction of our natural resource sector and attaching green energy initiatives on everything from health, to summer jobs funding, to infrastructure.

Canadians should be the ones deciding the social, political and economic future of our country, not a Prime Minister who wants to remake our country into his socialist image.

To rebuild postpandemic, Conservatives support getting as many people back to work as quickly as possible in every sector, including natural resource development. It is critical that government puts forward policies and legislation that take into account the long-term impacts on the prosperity of our nation. Conservatives are prepared to do just that.

Erin O’Toole has clearly stated, “This isn’t the time for ‘re-imagining’ the economy. This isn’t the time to toy with our future. This is the time to overcome COVID-19, protect the vulnerable and save jobs. Once the pandemic is behind us, build back our economy as quickly as possible. This is the priority of Canada’s Conservatives — jobs, growth, prosperity and above all else to bring back certainty to our country.” The ‘Reset’ this country actually needs, is a change in leadership through a new Conservative government.

Glen Motz is the MP for Medicine Hat-Cardston-Warner