Darrell down under and back again! 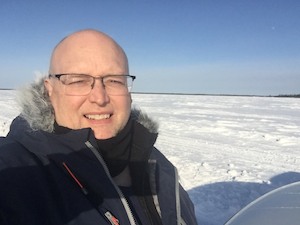 It’s quite a change going from 45°C to -45°C — my body struggled to adapt, but eventually it did adapt. I knew I was acclimatized when I needed to take the rubbish out — but I didn’t feel like putting on all my winter clothes.

So, at -26°C I went outside wearing nothing more than Crocs, shorts and a T-shirt. I was outside for about two minutes fiddling with a few things on my car. When I came inside, I felt cool, but not freezing. It’s hard for me to believe my body could handle this temperature without freezing.

For more than 20 years I lived in Australia, where just about everything tries to either kill you or maim you.  Aussies are a tough people when it comes to surviving in hostile environments. They have an unrelenting faith things will either work out, or they won’t and either way one just has to deal with the situation.

It is rather funny realizing what Australians are worried about, as compared to tourists. When tourists travel to Australia, generally speaking, they are concerned about snakes, spiders, sharks and all the other critters that can cause pain and take human life in the blink of an eye. I personally think this is a reasonable concern and something to be mindful of, but with Australians, their concerns are more in-line with magpies that dive bomb unexpecting pedestrians. In fact, they have a whole method to protect themselves against these pests. They wear hats on backwards, so the birds think the person is facing the other direction. The birds only strike from behind.

There is no doubt bears can be dangerous and Canadians, in general terms, have developed a different sort of toughness.  I have relearned what this toughness really is all about. Coming up to the Northwest Territories found me face-to-face with a small herd of bison and with a beautiful lynx. These animals have the potential to be dangerous, but the real danger is in the climate. Unlike in Australia, where the weather is hot and inclement — generally speaking, the weather isn’t trying to kill you.

In Canada, that’s exactly what the weather is trying to do. Of course, at the extreme temperatures of 45°C staying outside unprotected and exposed invites a potential visit to the hospital to rehydrate and cool serious sunburn. I have certainly spent a day outside in 45°C. So long as you protect your skin and wear a hat and drink lots of water, you’ll be fine. That can’t be said about -45°C. I have been learning what it means when we sing in our national anthem, “true north strong and free.” The sort of strength it takes to survive in an environment that constantly wants to kill you, in my opinion, is a whole different level of mental fortitude.

Soon, I’ll be heading out onto the land to learn how nets are run under the ice and to learn a traditional way of tracking and trapping animals.