Q and A with Volbeat 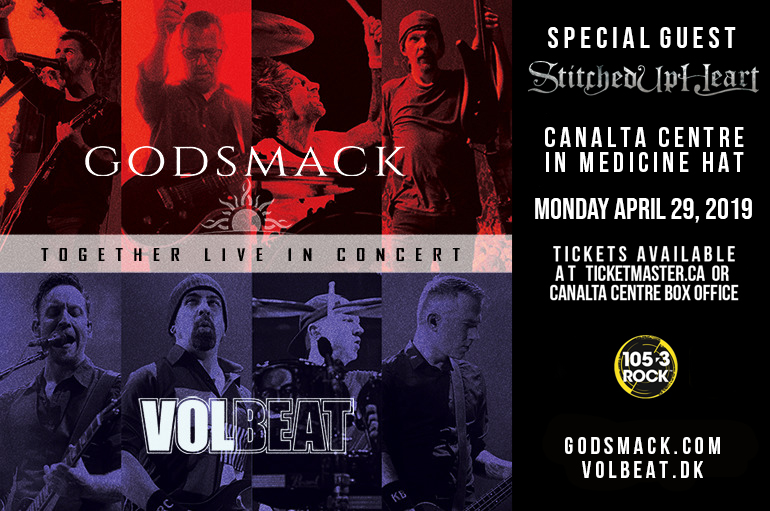 Volbeat and Godsmack are co-headlining the ultimate high octane double bill tonight (Apr. 29) at the Canalta Centre in Medicine Hat with special guest Stitched Up Heart. Doors open at 6:30 p.m. Show kicks off at 7:30 p.m. Tickets are on sale now at ticketmaster.ca or at the Canalta Centre Box Office.

Stan Ashbee: How has the Canadian co-headlining tour with Godsmack been going, thus far?

Rob Caggiano: So far this tour has been really great! It definitely seems like the Volbeat fans and the Godsmack fans are having a great time out there and we’re very happy to see that. We’re also very happy to be back on the road. We’ve been very busy for the past few months working on the new Volbeat album, so it feels great to be up onstage again. Good vibes all around.

Stan: Is Canada supportive of the band? What are your thoughts on Canada?

Rob: Canada has always been amazing. The audiences really appreciate live music here. The last Volbeat Canadian tour was a lot of fun! It really seems like Canada is connecting with us and vice-versa. I’d go so far as to say that some of my best shows ever have been up here in Canada — even back in the Anthrax days. It’s always been great.

Stan: What can audiences expect from this double co-headlining bill?

Rob: We started this tour with a few U.S. shows and I think everyone found their groove right away. The shows have been fantastic and both bands seem to be in top form. You’re gonna get a great show.

Stan: What are your thoughts on the live music scene?

Rob: I think the live music scene is thriving right now. Obviously, it depends on where we’re talking about. I’m from New York City and it seems like the scene in New York is pretty sleepy these days. But, I know there’s a ton of great stuff out there all across the globe.

Stan: What are your thoughts playing the smaller markets in Canada and elsewhere?

Rob: We’ve already played most of these markets before a few times, so it’s nothing new for us. In fact, I’m looking forward to seeing some familiar faces out there.

Stan: Any future plans for the band? Any new music on the way?

Rob: Yes indeed! We have a new album in the pipeline and we’ll be dropping that soon. There’s no official release date yet, so I won’t discuss that — but it’ll be out there soon enough. We’re all excited about it.