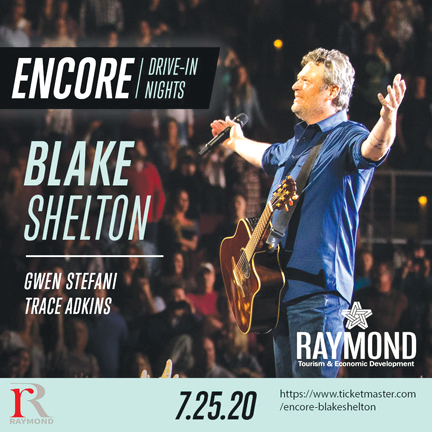 On the night of July 25, a number of music superstars will be coming to the town of Raymond in the form of the big screen.

As part of the Encore Drive-In Nights concert series, Blake Shelton, Gwen Stefani and Trace Adkins are all making their way digitally to Raymond for a special theatre drive-in concert at the Raymond Plaza located at 53 West 500 North in Raymond.

The Encore Drive-In Nights launches with an all-new performance by Shelton, Stefani and Adkins with showings across Canada and the U.S.

Tickets went on sale on Tuesday morning and tickets are $155 per standard car or truck, with no more than six people per car and each guest must have a seatbelt.

The maximum capacity for the show will be 150 vehicles.

“The Town of Raymond sees this unique opportunity as a way to provide activities for not only local residents, but also a means to help attract visitors from all over Southern Alberta. Using your vehicles own radio system and watching the show on a 4 story tall screen means that those in attendance will each have a great seat to take in this concert,” reads a press release from the Town of Raymond.

As the only showing in Alberta, Raymond Plaza expects a complete sell-out of the event.

“This show is only shown at Drive-in locations and we’re the ONLY location in Alberta that you will be able to see this never-before-seen concert! Thanks to @OutdoorMoviesAlberta for bringing the nearly four-story tall screen! Be sure to follow this page for future announcements for upcoming concerts (yes there will be more). This is a safe way to take in a unique concert this summer! So make the short drive to Raymond! You will not see this concert anywhere else in Alberta,” reads a post on the Raymond Plaza’s Facebook page.

A further post on Raymond Plaza’s Facebook also explained if there was enough demand, there may be a second showing later the same night.

Parking for the event is based on a first-come-first-serve basis and gates typically open an hour before showtime but attendees are encouraged to check with their local theatre first.

Vehicles and people that leave the theatre will no be permitted to re-enter and the event will go rain or shine.

The event also encourages attendees to bring a battery-operated radio to listen to the concert to limit vehicle battery usage.

Showtime is 9:45 p.m. on July 25 and tickets can be purchased at http://www.universe.com/onsales/blake/events/encore-drive-in-nights-blake-shelton-raymond-alberta-tickets-D2YSQG.