Posted on October 8, 2014 by Westwind Weekly 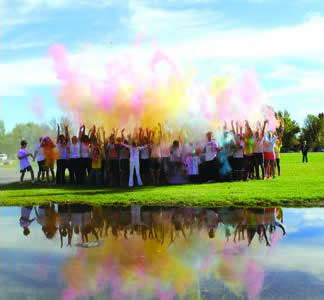 On Friday afternoon evidence of pink, yellow, blue, orange and purple chalk remained on the Magrath High School grounds long after the youth had gone home to enjoy their weekend. Its lingering presence served as a reminder of the fun and memories of the 165 participants who participated in a colourful Terry Fox Run.

The event was made possible thanks to the hard work of the ten-member high school student council and 15 parent volunteers.

“(Colour runs) have just become really popular and we thought it would be something exciting for the kids at our school to get a chance to do because the closest ones to us are usually in Calgary,” and they cost a lot more money, said high school council president Alyssa Doig.

Doig and vice-president Teesha Olson started planning the event back in August, with planning kicking into full gear once classes started.

This was the first year that the high school had the colour run option and Doig hopes to see the event stick, but it will depend on how the next year’s student council wants to spend their budget because the 2014 members are all graduating.

“Everyone loved it, many younger students thought it was the greatest thing ever.”

Aside from wearing a smile, many participants chose to don all white to let the bright chalk colours fully shine.

“It took a lot of work and long term preparation, but it was really awesome to see it all come together. And the fact that everyone had such a good time was the best part.”

Doig went on to add that at times serving on council can be stressful, and you can’t control every situation and outcome, but sometimes things do work out perfectly.

Students had to make a minimum two-dollar donation to the Terry Fox Foundation in order to participate in the colourful course, about $400 was raised as a result.

“It was a super fun time and the fact that we got to raise the money for cancer research made it that much more rewarding.”