Little Prison Camp on the prairie 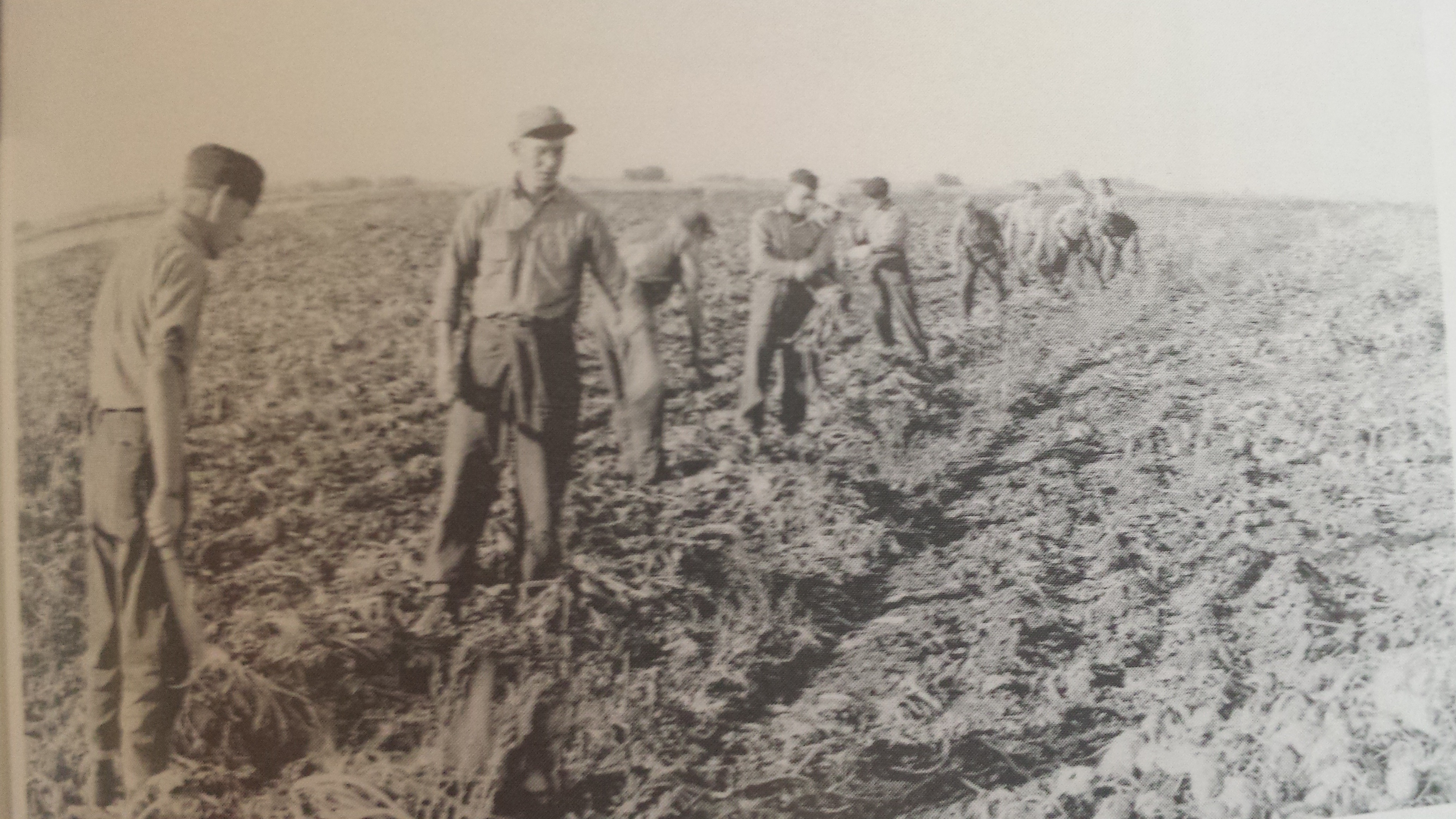 Many have made a special effort to remember the service of those from our communities who went to war. We have often heard of many women entering the work force to support the war effort and keep things working here at home. But how many remember that we had a Prisoner of War camp right outside of Magrath?
While many went to serve, the largest Prisoner of War Camp in Canada was built in Lethbridge in 1942, and by November, was housing over 13,000 prisoners. The city’s population was just only over 14,000 at the time, so the camp almost matched that number.
As many southern Alberta men were off to war, sugar beet farms in the area were in need of workers. In 1945, Prisoners of War, who were deemed trustworthy were able to work on the farms. Some worked during the day and returned to Lethbridge Camp 133 to sleep, but smaller camps were set up in various areas where prisoners stayed for the whole season. One of these camps was located north of Magrath at Lehi Field.
A simple barbed wire fence separated the camp of 150 prisoners of war from Azer and Emilie Briggs’s farm. Tents were set up on the Lehi School grounds for the summer to house the workers.
The late Hermine Briggs Horman shared her memories of the camp in her life history, Heart Strings from the Book of Horman. Hermine felt it unfair that her mother gave strict instructions to her and her sister Emma Lou on their behaviour, yet their little brother Jim was free to go as he pleased. Although she knew the prisoners were considered enemies, most of the time Hermine saw ordinary young men like she would see in Magrath.
Only on Sunday did they become strangers from a foreign land. That was the day they had dress parade and put on their full uniform and did the goose-step march and drills. We loved watching them and admired their highly polished boots and bloused breeches. But Monday through Saturday they were young men like our brothers and fathers.
The prisoners, some of whom were as young as 17, became very good friends with the family. Emilie Briggs was raised by a German grandmother and loved to speak the language. The Briggs were also very Christian-minded people, and taught their children to behave accordingly. “We were told to ‘always be kind to them. We want the Germans to be good to our boys.’” The family treated the prisoners well, and in return, the prisoners worked hard and built strong bonds with the family.
As these were still the war years, Canadians were on strict rations for foods from sugar to butter and meat. Under the Geneva Convention, however, PoWs were provided with the best of what was available, and often gave the family sugar, especially for canning, and the tea and coffee the farmers were expected to provide the workers.
Every evening during the week, the PoWs lined the fence facing us, and sang their native songs to accompaniment of guitars, accordions, concertinas, mouth organs and Jew’s harps. They formed a grand chorus of four-part harmony whose rollicking melodies filled the twilight on the prairies. After one of their renditions, our Briggs clan sang one of our favourites. We had quite a repertoire because we sang together often all our lives. We took turns singing until Mother summoned us to bed. Reluctantly we left our friends, not our enemies. We slept well, and were not threatened in the least that they would harm us.
At the war’s end, many a tear was shed saying goodbye. Several wanted Daddy to sponsor their return to Canada. All invited us to visit them in Germany.
The Geneva Convention dictated that all Prisoners of War must be returned to their countries as soon as possible at the end of war. Many Germans who were held in Canadian camps sought sponsorship to return to Canada. Lethbridge Camp 133 closed in January 1947.
Excerpts and photos from Heart Strings from the Book of Horman by Hermine Briggs Horman, Distinctive Publishing, Salt Lake City, Utah, 1991
Additional information drawn from Prairie Prisoners, POWs in Lethbridge during two world conflicts by Georgia Green Fooks, published by the Lethbridge Historical Society, 2002
Resource books provided by the Magrath Museum.