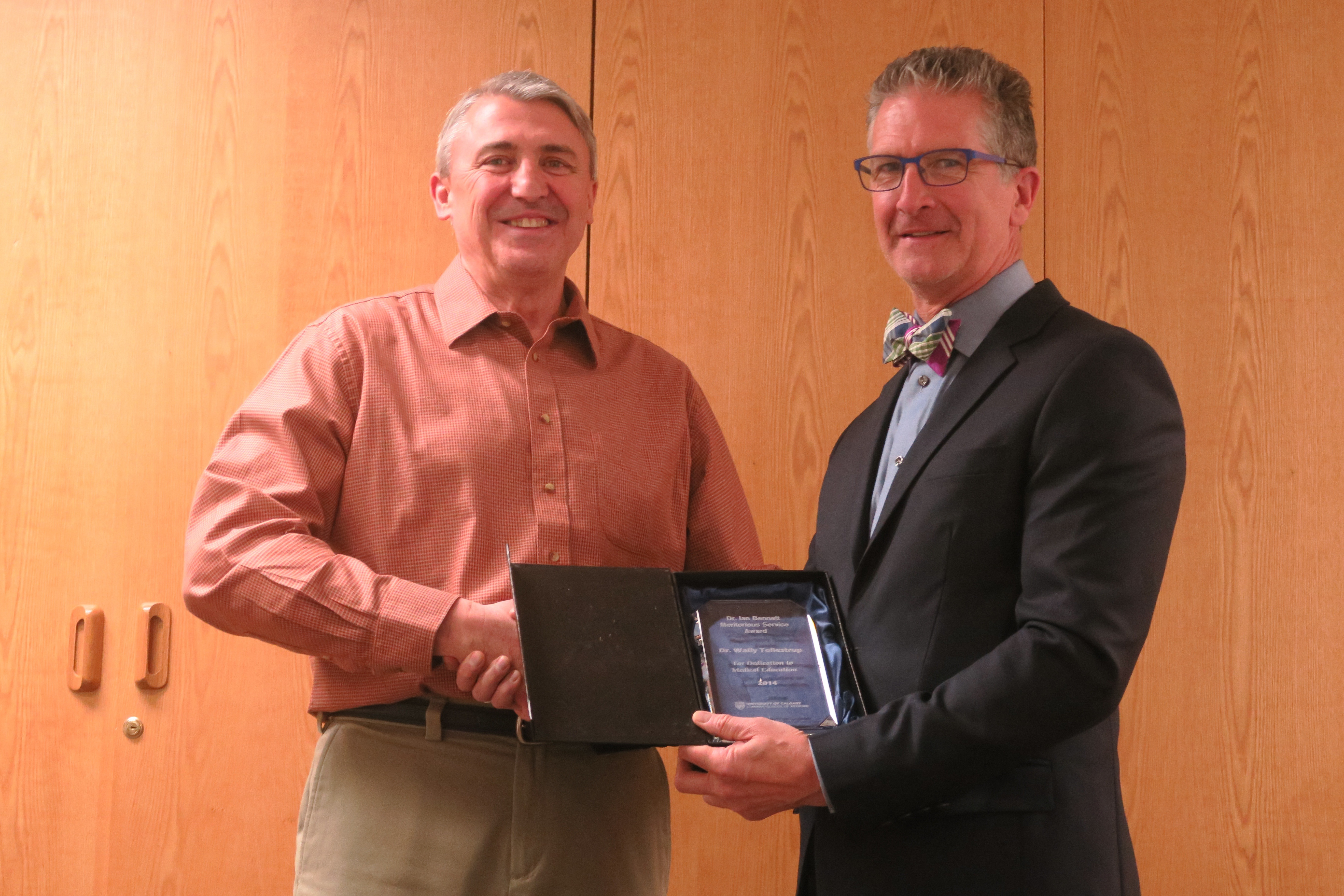 On Monday afternoon Dr. Wally Tollestrup was awarded the Dr. Ian Bennett Meritorious Service Award for Teaching in honour of his extraordinary dedication to rural medicine and educating other doctors.
The presentation at the Raymond Health Centre humbled the doctor of 37 years. He was surprised that people thought that highly of him and his contributions to the community.
“It always feels good to be acknowledged by your peers,” added Tollestrup about the award where fellow doctors and the medical community recognize one another.
Tollestrup’s nomination was a community recognition, featuring letters of support from hospital staff, clinical staff, other doctors and community members alike. He beat out four other nominated candidates to be the inaugural recipient of the award.
The Dr. Ian Bennett Meritorious Service Award for Teaching was established last year by the Cumming School of Medicine, the new faculty of Medicine at the University of Calgary.
“It was established to recognize those doctors in rural Alberta who provide services and medical education for years,” explained Dr. Doug Myhre, Associate Dean Distributed Learning and Rural Initiatives, University of Calgary.
The doctors who receive the award are the “go to people” who are willing to do extra work and provide teaching opportunities.
Over the course of the 14 years that Dr. Tollestrup has been involved with the University of Calgary Rural Alberta South medicine program he has overseen and mentored approximately 60 residents.
“Wally is dedicated to medical education, he is humble and a very affective doctor. He is one of the unsung heroes that deserves to be recognized.”
Receiving the award was extra special because Dr. Tollestrup personally knew Dr. Bennett and considered him a mentor.
Having Arline Bennett and Pam Haapo-aho in attendance to bestow the award in honour of their late husband and father was what stood out, shared Dr. Tollestrup in an interview the next day.
“He was definitely a mentor, his enthusiasm for teaching and his advocacy for both the resident and the rural program, I very much adopted that thinking … His influence on me was substantial, I certainly listened to him and tried to follow his lead as best I could.”
“I would be a little presumptive to say that I was anywhere near the teacher or physician that he (Dr. Bennett) was, but I think in some ways we are similar.”
Tollestrup pointed out that they both practiced similar styles, went the extra mile to look after the needs of their patients and were involved with community service.”
Dr. Tollestrup did his schooling at the University of Alberta, officially starting his medical career in 1978. He practiced in Lethbridge for his first 10 years and has been in Raymond for the past 27 years.
Though he grew up in Raymond, he admitted that practicing back home wasn’t his initial plan. Looking back he is glad he took the opportunity because he has enjoyed the advantages of working in a smaller center. These include getting to personally know patients outside the doctor’s office and having a close working group of doctors on call to rely on.