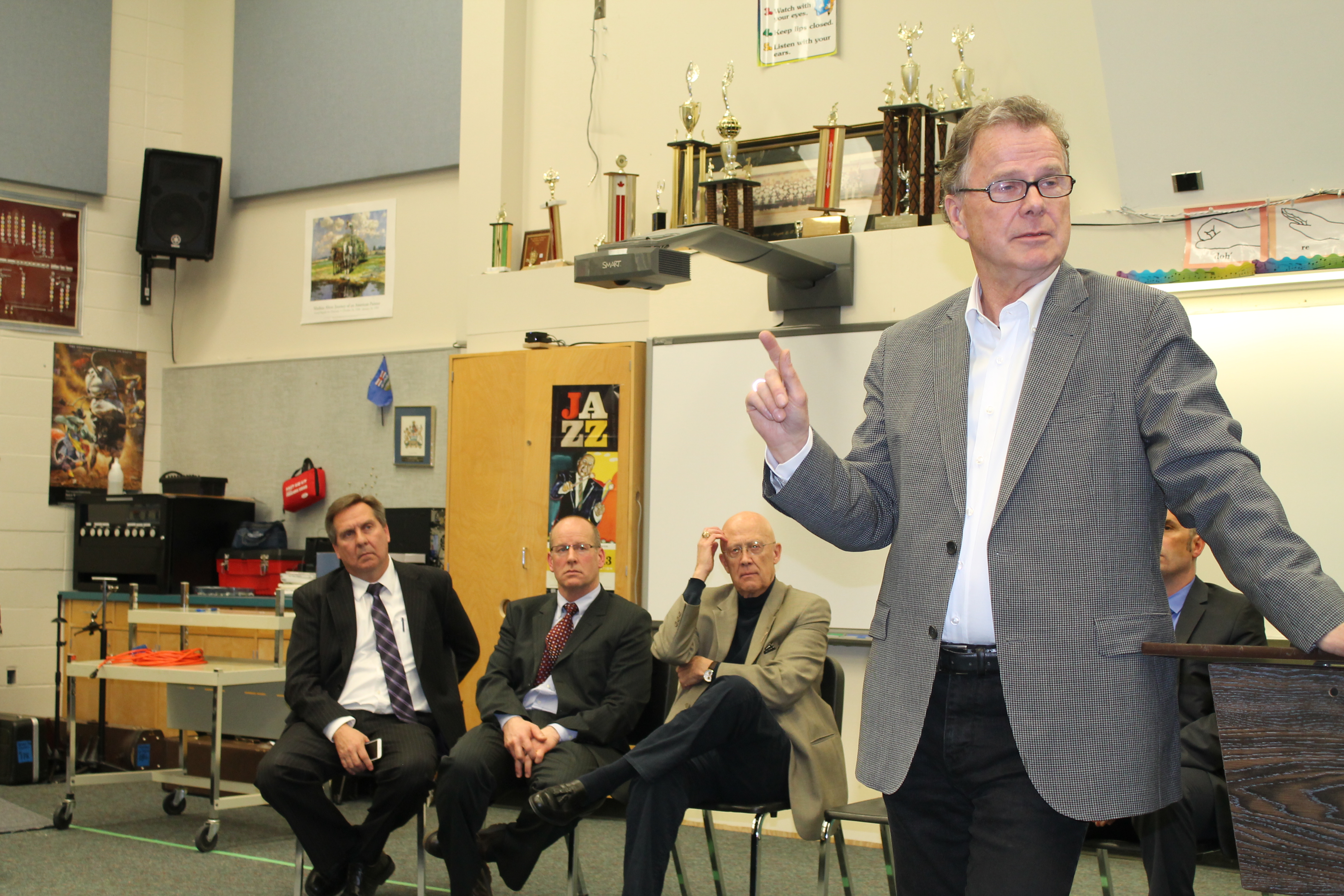 Alberta Education Minister Gordon Dirks was in Magrath Saturday evening, while here he promised that the school modernization will go forward as planned.
Dirks was in Magrath to endorse Gary Bikman in his bid as PC candidate for the Cardston-Taber-Warner riding, answer constituents’ questions and meeting with the Westwind School Board.
Dirks drew distinctions between the Redford PC government and the Prentice PC government, explaining that entitlements in the government over recent years have led to budget problems. He said the new budget, to be released March 26, will not rely strictly on cuts to correct the problems. “Money can’t be found by making cuts. It requires a prudent, cautious approach.”
Upon being asked if the Magrath School modernization plans will go forward even if Bikman is not elected, Dirk said the 232 school projects announced in recent years will all go through as planned, adding, “Education is always a long-term investment that government should make, even if it requires borrowing.”
Ken Sommerfeldt, Superintendent of the Westwind School Division, spoke of the school plans as something that is for the benefit of more than the students in Magrath. “This project is wider and bigger than the modernization of a school. The whole community is on the edge of something that could be quite significant. This partnership will bring great things not only for the kids, but for the whole community.”
Sommerfeldt also took the opportunity to point out to the minister that MHS had all Grade 12 students graduate last year — a rare achievement in education.
Town councillor and former Magrath Elementary School principal, Brenda Beck said the school project is “the most exciting venture taken on as the town entered a partnership with the school board.” She says the involvement of the community will determine the project’s success. “We are starting from the ground up, and we’re depending on volunteers from town; as we get good people putting together good plans and policies, we will see exciting and amazing possibilities.”
Using the planned black box theatre as an example, Beck spoke of how offering MHS students an opportunity for a drama program came at the cost of the elementary losing a gym for a couple weeks. With the new plans, that will no longer be a problem and the theatre has possibilities of being a benefit to the community beyond a drama program. As well as a location for piano recitals and scout awards, “it can potentially be a big multi-purpose space for meetings and events. We need a good working relationship with the school and the drama community. [All groups involved] need to have a say in how it’s run.” She added that plans are still in preliminary stages and we still have room for finalizing agreements.
In the open meeting, MLA Gary Bikman explained his reasons for crossing the floor from Wild Rose to Progressive Conservative Party. He said, “I believe I was elected because of (what) Wild Rose stood for, irrespective of who Gary Bikman is.” He said his time on the opposition was to insist the government reduce entitlements. After Jim Prentice became PC leader and premier, he saw the things Wild Rose attacked in the spring session were no longer issues. He felt the PC now represent principles and policies his constituents want him to support.
The minister also said the new provincial budget “is a budget like you’ve never seen before.” Following the open meeting, Minister Dirks had a private meeting with the school board.