Can you keep to the beat? RHS Show Choir spring instalment hits the stage 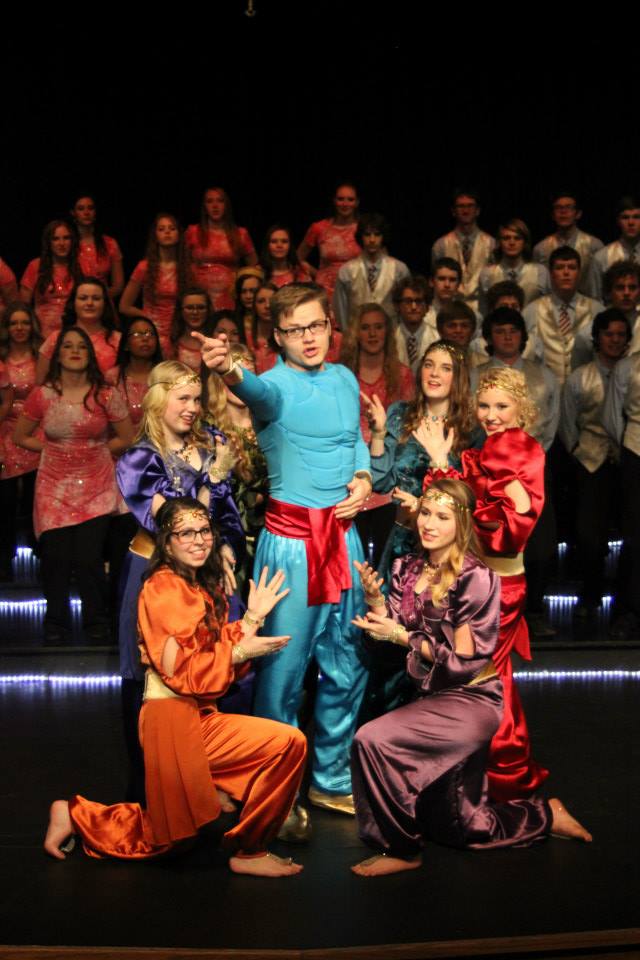 “Tonight’s Gonna be a Good Night” if you’ve bought tickets for the Raymond High School Show Choir spring production. The hour and a half long variety show highlights the diverse talents of 67 students as they guide the audience through a fun-filled adventure at the Broadway Theatre between March 30 and April 4.
“It is a very entertaining show, we have a good group of kids that are really willing to put themselves out there,” said Derryl Atwood, RHS Show Choir Administration, about the cast.
This year marks the 24th anniversary of the program, but the mission statement “to provide an opportunity for involvement in an uplifting and character-stretching choir program to any student with the desire to participate and the willingness to put in the required time and effort,” remains true.
Students have been stuck in rehearsal mode, putting in long hours since January. The group spent the first 10 Fridays after school learning music and the following two mastering the choreography movements.
“It is done quickly, it is always amazing how well the kids do. They have to learn to stay focused.”
Sue Williams is once again the RHS Show Choir director, but “[i]t takes a town to put it together,” said Atwood of the 18 adult volunteers and the countless ways parents help provide support for the show.
This year’s show, “Tonight’s Gonna be a Good Night” encompasses many different genres of music and dances from a variety of eras. The performance starts with a bang as the students perform an 80s Dance Party Medly to build up the excitement in the audience, transition to a few more mellow tunes and dance routines in the middle and then build up to a final big grand finale to wrap it up.
On opening night Monday, the show was well received, but a few performances stood out as crowd favourites. During “Friend Like Me” a cool genie and Arabian dancers take to the stage to dance and perform intricate acrobatics.
And another favourite the “Muppet Medley” features a humourous dance routine featuring many recognizable Muppets characters including Mah Na Mah Na.
“It is a celebration of their talents and what they bring to the show as individuals that makes the show unique every year.”
Showtimes are at 7:30 p.m. nightly with the exception of the April 4 matinee that will start at 2 p.m.
Each of the choir members was responsible for selling at least 20 tickets to friends, family and community members. There was also a competition to see who could sell the most, with the winners receiving some extra spending money for the annual trip.
Marshall Miyashiro took the top spot, selling 51 tickets, while Kareyna Nickle and Julie Shkuratoff tied for second with 41 sales. Hunter Graves also sold an impressive 40 admission tickets.
Proceeds for the show go directly back to the Show Choir to help cover the costs associated with the program. It also helps subsidize the tour that the youth look forward to every year and makes it possible for everyone to go.
This year, the students will be out of town from April 5 – 11 when they take coach buses to California. The first official stop will be on the 6th when the Show Choir performs at the Desert Hot Springs High School.
The school of 2,000 has a large band program and a chamber choir. They are looking forward to visiting with the Raymond youth and meeting the “snow kids from the snow country,” shared Atwood with a chuckle.
“One thing I’ve really noticed is that when we go on tour to perform outside of Raymond, they become performers, whereas when we are in our theatre they kind of feed off the audience,” noting there is an evident switch in the youth and they become next level entertainers on the road.
Taking the show on tour is a big highlight for many of the students and one they look forward to all year.
While in California they will also be given some time to kick back and relax after all the hours of practicing and performing. Visiting Disney Land and Balboa Island will be extra special, because it will be the first time some of the kids experience a different part of the world outside of Canada and many will get to see the ocean for the first time, explained Atwood.
Tickets are eight-dollars and can be purchased or pre ordered in advance by calling Shonna Steed at 403-752-3872. You can also try to purchase tickets at the door if any are left, but word of mouth often leads to sold out shows towards the end.