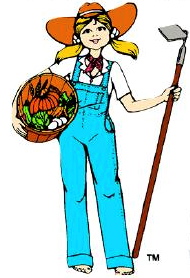 By Karlene Skretting
Westwind Weekly News
reporter.karlene@gmail.com
Shop local: Tuesday’s starting June 16 at the ice arena
It’s official, the Magrath Farmer’s Market will continue for at least another year.
After an inaugural year of highs and lows -that included both poor patron and vendor turnout at times- the Magrath Farmer’s Market committee is optimistic that having an approved market is beneficial to the community. And that things can only get better with increased public support.
The Farmer’s Market will kick off on June 16 and run every Tuesday until September 29 (tentatively the last day). It will take place at the Garth Veale Arena between 4:30 and 7:30 p.m.
“The Farmer’s Market did okay (last year), but it was felt that the town’s people could have participated a bit more,” said Coun. Brian Oliver, who also sits on the Magrath Farmer’s Market committee, at a recent council meeting.
He went on to explain that the committee decided to keep the same venue and day of the week as last year, in an attempt to maximize attendance through repeat visitors and vendors.
“I see the market as an opportunity for local people to come out and sell their wears,” said Leisel Quinton who has stepped up as the interim market manager. One of her goals this year is to focus on increasing the number of local Magrath and Raymond vendors participating.
Being an approved farmer’s market requires that 80 per cent of the vendors made, baked or grew the items that they are selling. Only 20 per cent of vendors are allowed to sell commercial products.
The advantage of an approved farmer’s market is the fact that anyone can sell items that they bake or cook at home, an approved commercial kitchen is not a requirement like it is at a public market, explained Quinton. Noting that individuals still need to make sure that the items to be sold are labeled and packaged correctly.
“Following the ‘Make It, Bake It, Grow It’ philosophy, Alberta approved farmers’ markets provide a direct contact for consumers to producers. Consumers can talk to the person that grew the carrots, raised the chicken, baked the bread, produced the jam, or knit the sweater. Each approved farmers’ market in Alberta is independently operated and therefore reflects the culture of the community,” reads the Alberta Approved Farmers’ Market website.
“If you are thinking of starting or growing a business, an approved farmer’s market is the perfect place to test out your baking or crafts,” said Quinton, who’s butter horns and cream puffs have grown to have quite the following at local markets.
“I think the biggest thing is advertising and finding other vendors at this point,” said Quinton about the priorities of the committee going forward.
An approved farmer’s market requires that a minimum of 10 vendors attend and showcase their items at an event. Last year, there was weeks that the Magrath Farmers Market had 30 vendors in attendance and the committee is hoping to maintain a good assortment of products throughout the summer.
Interested vendors do not have to commit to the whole summer, they can commit to a single week or month at a time, as long as they comply with health regulations. There will be a $15 fee per table, per market.
If you wish to be a vendor or want more information about the Magrath Farmer’s Market please contact Leisel Quinton at 403-758-3946 or email magrathfarmersmarket@gmail.com.