Magrath trains for a state of local emergency 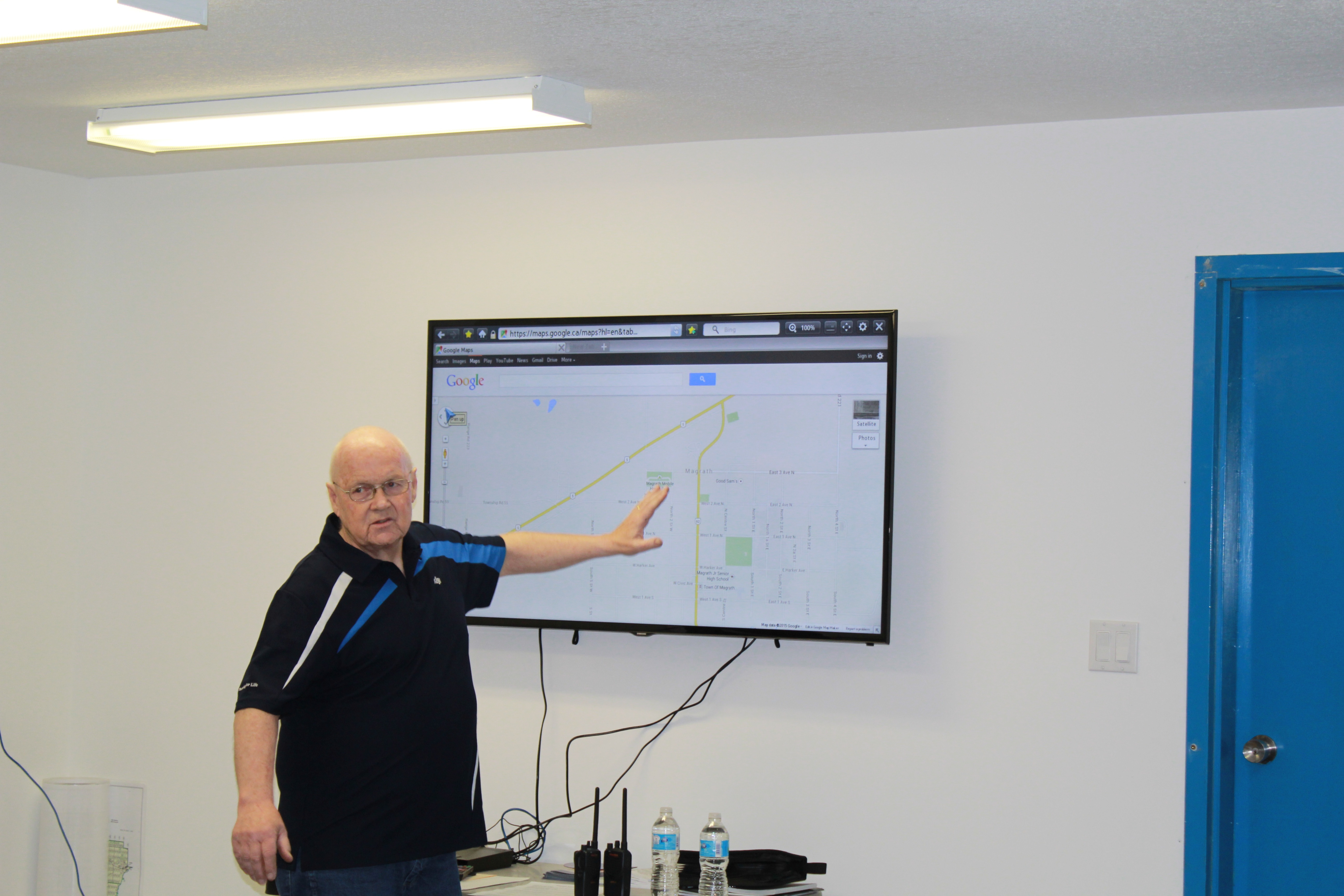 If an emergency or natural disaster strikes, being prepared can help a municipality to efficiently react and minimize consequences and harm.
To prepare for such a possible scenario, the Town of Magrath has been working on its Emergency Plan.
Last Wesnesday, an emergency management training session was held at the Magrath Fire Hall to test the strengths and weaknesses of the 124-page document.
Following a debriefing, the group was given a disaster scenario that they had to work through as a community.
The situation involved a fuel fire at the Blue Goose Gas Bar and Convenience Store, where a motor home had become fully engulfed in flames, caused while filling a propane bottle. The fire quickly spread and caught the business on fire too.
The scenario was during an early Friday afternoon, 18C weather, with 15 km/h west winds.
“It was a realistic scenario,” said Ken Hoibak, director of emergency services, after the exercise. “There is 160,000 liters of flammable product very close to a residential area and a couple blocks from a senior’s facility. Odds aren’t great, but propane tanks have exploded in the past.”
There were close to 20 people in attendance with representatives from Alberta Health Services, Diamond Willow Lodge, the Good Samaritans Society, Magrath Fire Department, Magrath LDS Stake, RCMP, Town of Magrath, Cardston County and Westwind School Division. They were all on hand to voice their opinions and concerns at the Emergency Operations Centre (EOC), as the mock emergency scenario unfolded.
Representatives from the Alberta Emergency Management Agency were also on-site to provide guidance and facilitate where necessary.
“Every time you do an exercise, it shows you the good things that you are doing, and it also points out the areas that you need to improve. And finding ways to improve is the benefit of the exercise,” said Hoibak who served as incident commander Wednesday night. He or Shane Zobell (deputy director) would be the one in charge if the EOC were ever activated because of a real emergency situation.
On top of dealing with the roaring blaze, the group decided to call in backup firefighting reinforcements, recruit the RCMP to help block off the site and divert traffic, evacuate a three-block radius, have the Good Samaritans Society shut off their ventilation system and prepare their residents to possibly evacuate.
The Town of Magrath also issued a CodeRed emergency alert over the phones. The group also had the Magrath Stake start preparing in case the situation worsened and residents needed a safe place to stay outside there homes, because a three block radius was evacuated.
Over the course of the exercise, Mark Murphy, Alberta Emergency Management Agency, field officer, southern Alberta, reminded the room several times of the four priorities of emergency management: 1) Save lives and minimize the impact on people, 2) protect property, 3) protect the environment and 4) protect the economy.
Murphy was persistent to get the point across that the safety of all people are of utmost importance and that there needs to be no concerns about human safety before addressing the other three aspects of emergency management.
As the scenario evolved and changed, the group had to think on the fly about how they wanted to respond. They quickly learned the advantage of taking a bit of time to make the best decisions, rather than rushing.
“I think we have formed some really good partnerships,” said Hoibak. “That is the biggest thing, knowing who is in your community and how they can assist you.”
“We are incredibly fortunate to have a really good relationship with the local LDS Stake, that provides us with a huge amount of resources. And a lot of what they have in place, we can piggy back.”
The Alberta Emergency Management Agency was complimentary of the impressive level of resources present and available in Magrath, and credited those in attendance for the fact that they have an honest desire to take care of the Town and its people.
Though, Murphy did say that, “Magrath needs to learn to walk before they can run, and a lot more walking is needed to smooth things out.”
“Communications, both internally and externally, are huge. And that is something that can be improved upon,” admitted Hoibak in an interview after the exercise.
During the emergency scenario exercise, Murphy reminded participants of the importance of detailed note taking to ensure that a timeline of events was available so that everyone knew what they were doing and so that the group could easily tell what was and wasn’t already done.
This is one of the areas under the Communications objective where Magrath needs more practice.
“Normally keeping track of this might be easy, but during an emergency, stress levels are high. You need to be methodical and write everything down because lives are at risk,” explained Murphy.
The Town of Magrath also learned the importance of being proactive and sharing the correct information in a timely fashion, rather than being reactive to false rumours and speculations created from a lack of shared information.
At one point during the exercise there were false rumours circulating on social media, because Magrath was not quick enough to distribute information to residents and the media.
One of the things that causes the most amount of trouble and confusion in an EOC is people not being fully aware of their duties and responsibilities or taking on too much responsibility and being involved in too many tasks, pointed out Hoibak.
Magrath needs to make sure that those who would be involved in the EOC are comfortable in their roles and know what their responsibilities are.
CAO Wade Alston reiterated the importance of cross training and having backups educated in how to carry out roles, after the scenario was solved and participants were asked for feedback.
“This exercise gave me tremendous confidence in the staff and resources that are in place to control a potential emergency in Magrath,” said Mayor Russ Barnett to conclude the exercise.