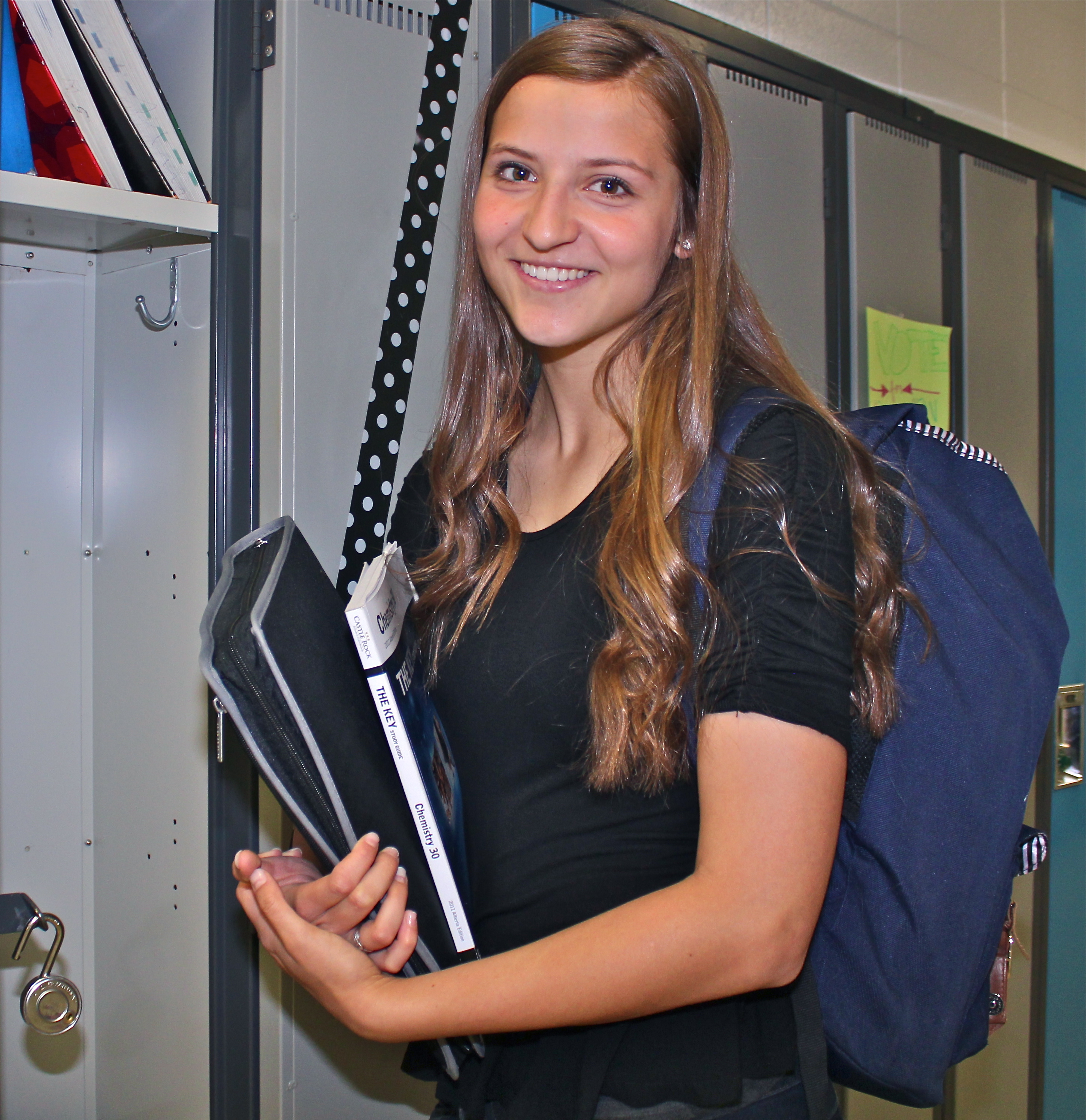 If you’re going to lead, Teesha Olson figures you might as well do it by example.
Olson will be class valedictorian at the Magrath High School graduation ceremony June 26. In her address to the Class of 2015 she plans to expand upon the theme chosen for this year’s celebration – ‘Be The Change.’
The phrase comes from a quote attributed to Mahatma Gandhi: “Be the change you wish to see in the world.” The 17-year-old says she hopes to use that notion to help motivate her fellow graduates to be “bigger than themselves.”
“To me the quote means by being the change you’re going to have to change yourself first and then you can incorporate that into the whole world,” says Olson, who moved to Magrath in her Grade 9 year. “It means you can’t expect people to change if you’re not changing yourself.”
A total of 54 graduates will be recognized at the evening ceremony at MHS. To be chosen to provide the farewell address was a real honor for the top academic student.
“I was definitely excited to be chosen. I’ve always tried to do my best,” says Olson. “What it means to me is that I can represent my class in a really significant time in our lives and hopefully inspire them to move towards the future and work harder.”
She took the lead this past year in running for student council for the first time, and served as vice-president. Olson is proud of events they put on to try and engage the students and the larger community from dances and pep rallies to the Terry Fox Color Run. There were also athletic highlights, including provincial banner performances by both the girls’ and boys’ volleyball teams, and a 3A basketball title for the girls, of which she was a member.
Olson says the launch of the school’s own clothing line, Zenda, was also a highpoint and she was impressed by how many people could be seen wearing the school’s colors throughout the community. The support they showed by packing the stands in the school gym was not lost on the student population either.
The Class of 2015 wouldn’t have made it this far without the assistance of their parents. Olson is grateful for the approach taken by her parents, Brad and Treena.
“I’ve never really felt pressured in academics. They’ve just let me do my thing and I think that’s been really helpful to me, not to feel that pressure,” she says.
While Olson has benefitted from the guidance of many teachers over the years she was really impressed by the staff at MHS this past year. As a member of student council she says they were ready and willing to help with whatever was asked of them.
She also noticed those teachers who reached out to students who needed an “extra friend” and made a point of focusing not only on the majority of the students but the whole class.
Once Olson exits the school for the last time she says she’ll miss the camaraderie and the atmosphere she’s enjoyed at MHS.
“There’s really not enough people in your grade to just be friends with, so you become friends with a whole bunch of different ages,” she says of the rewards of what amounts to a K-12 school with the adjoining junior high and elementary classrooms. “And there’s the preschool you get to walk by every day. You won’t be able to have that experience at university, seeing all the age differences as people progress through school.”
As for her future, Olson has been accepted at the University of Lethbridge for the fall with plans to become a speech pathologist. She’ll also suit up for the Pronghorn women’s basketball team.
“It’s just a really fulfilling job because you can see people progress from the beginning of the year to the end of the year,” she says. “You get to work with kids which I love, or elderly people, which would also be fun.”