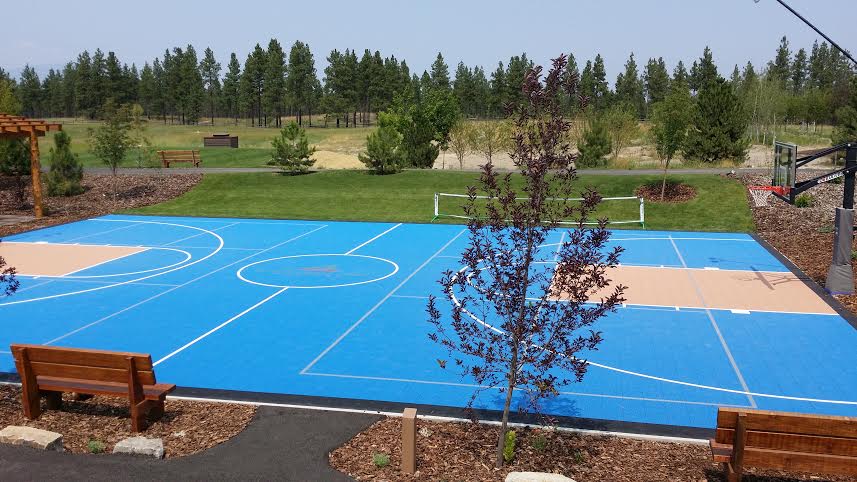 New basketball courts at Raymond’s Centennial Park are set to become a reality by next spring.
“This project has been a part of Council’s master plan for the community and is a part of the budget we passed earlier in the year,” said Raymond Mayor George Bohne. “It is another part of making our community more family friendly by expanding activities families can do in town.”
According to Richard Bohne, director of community services for the Town of Raymond, Council met with students from Raymond Elementary School to find out what they thought would make the town more enjoyable.  This meeting, according to Coun. Cathy Needham, took place last year when her and Coun. Clark Holt visited a sixth grade class where the proposal for the court, along with other proposals like a skateboard park, a riding area, and a spray park were presented to a panel. Coun. Needham said that the predominant choice, through evidence given from the presentations, was new basketball courts.
“A good basketball court was found to be at the top of the list,” Richard said.
The courts themselves, explained Richard, will hopefully be available for use by next spring. The disruption to parking and businesses should be small. And construction work will occur after the pool closes at the end of the season.
The plan includes a larger court for teens and adults and a smaller court for children.
“It will only take a few weeks to install the court itself, but the whole park will take upwards of three to four months we are projecting,” said Richard.
Richard estimates that the court, which is slated to be 84′ x 52′ will cost approximately $50,000, but the whole park project will be upwards of $200,000. However, Richard said that grant money has already been earmarked for the purpose of the park and courts.
“Council loves the courts and feel they will be an asset to the community,” concluded Richard.