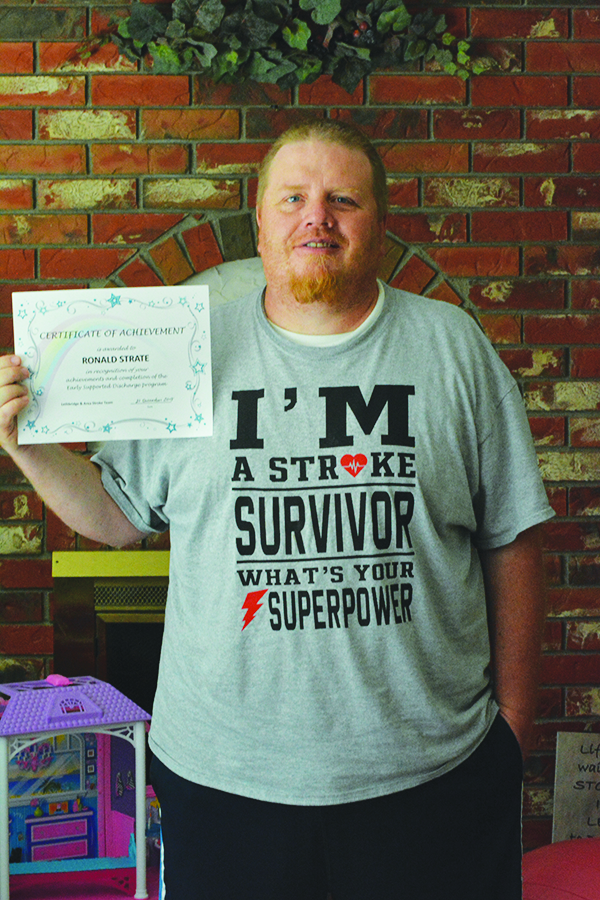 Stroke survivor Ron Strate holding up his certificate of achievement after completing an eight week program dedicated to helping him get back on his feet after suffering a stroke last fall.

A pounding head, blurry vision, dizziness and vomiting were some of the symptoms a local man experienced before learning he had suffered a stroke.

“It felt like somebody was hitting the inside of my head with a hammer…I went down on one knee and I crawled into my bedroom. I’ve had migraines before, but they had never felt like this. I tried getting up to my bed but I couldn’t,” remembered stroke survivor Ron Strate.

According to the Heart and Stroke foundation more than 400,000 Canadians are living with long-term stroke disability.

June is stroke awareness month and Strate says it’s important to generate awareness. It’s something that has affected him greatly.

“I have headaches every day and I’m very sensitive to light. If I’m around too much light it triggers them and so does noise. If I talk too much my speech will slow down, I might start to slur or stutter a little bit and my short term memory has weakened,” said Strate.

The Heart and Stroke Foundation identify two types of strokes that someone can suffer.

The ischemic stroke is caused by blockage or clot in a blood vessel in your brain. It is the more common of the two.

Hemorrhagic is the other type and is caused when an artery in the brain breaks open. The interrupted blood flow causes damage to the brain.

Strate suffered a Hemorrhagic stroke, where sometimes the signs can be harder to recognize.

However, some of the symptoms include extreme headaches, numbness and vomiting.

Ischemic strokes are a little easier to recognize.

Corinna Hartley, Stroke Coordinator with Alberta Health Services, says there are signs people should look out for to tell when someone is experiencing an ischemic stroke.

Diana Shanks, Director of Emergency and Critical Care with Alberta Health Services, adds although people aren’t in full control against strokes, there are ways to help prevent them from occurring.

“People can manage the risks by not smoking, managing your salt and sugar intake, managing blood pressure, living an active lifestyle and managing your weight. Those are key critical things that reduce your vascular risk and ultimately reduce your risk of a stroke,” said Shanks.

Strate is a school teacher at Magrath High School and since suffering a stroke in September, he’s been off work. It’s something he misses dearly.

“I wish I was at school, I miss the kids so much and I miss working with my colleagues, the staff and my administration. The principals have been awesome and have been so supportive,” said Strate.

Some days are easier than others for Strate.

His reasons for getting out of bed come from the people in his life who love him the most.

“I’m so grateful that I have an awesome wife, and a family who have learned to accept the limitations I have right now, who love me and support me unconditionally,” said Strate.

The Heart and Stroke Foundation estimates 62,000 strokes and transient ischemic attacks are admitted to emergency departments in Canada each year.

That’s one every nine minutes. Strokes are the third leading cause of death in Canada and over 13,000 Canadians die from them each year.

For more information on the topic or to learn more about the people suffering, Strate encourages a visit to the Stroke Survivor Facebook page.