Top of his graduating class 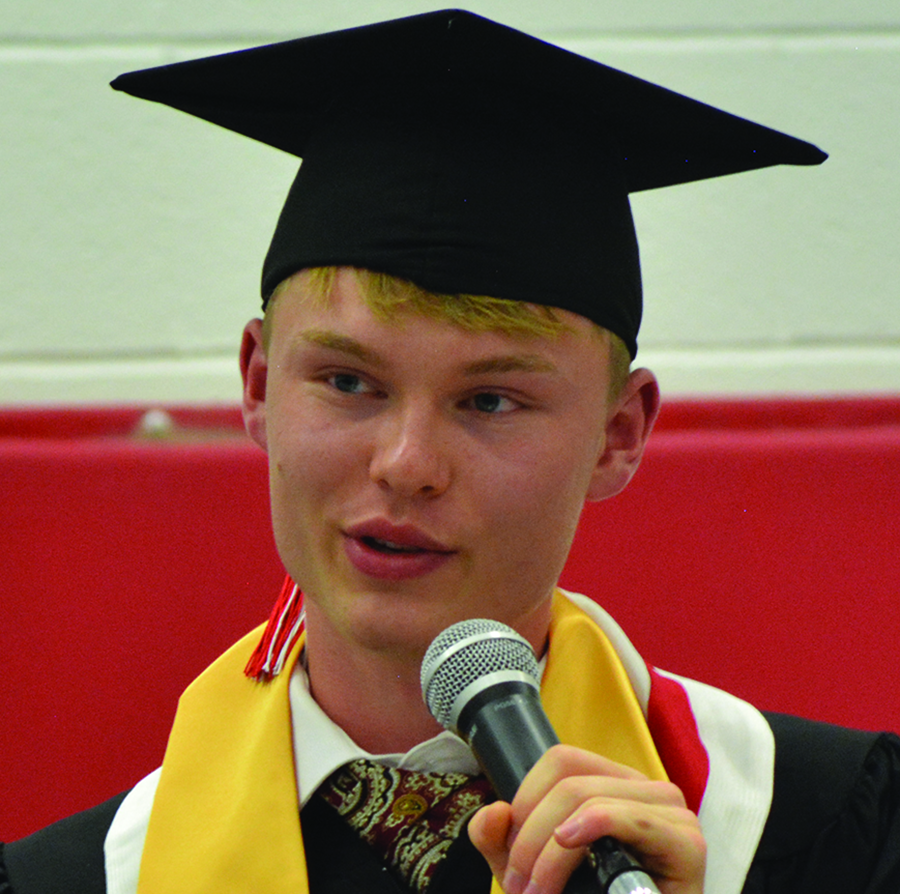 Erik Nielson delivers his valedictorian speech at the Raymond High School graduation ceremony inside the gym last Monday. Nielson has a scholarship to BYU in the fall.

Years of determination and hard work paid off, as one student from Raymond was recognized with the highest academic achievement among his peers.

Erik Nielson is the 2016 valedictorian for Raymond High School’s graduating class. Erik gave his memorable speech on Monday at graduation and said being named valedictorian was extremely rewarding.

“It’s an honour. I feel fulfilled now that I made it through high school. This has been has been a big chunk of my life, I grew up in this place. I kind of feel like an adult now,” laughed Erik.

Erik made school a priority and treated it like it was a career.

“Eight hours a day, five days a week. I kind of looked at it as a precursor to my job. I figured if i wanted to be a hard working person and have success in life, I had to build those trends now. It’s all about building (good) habits,” said Erik.

Erik remains humble throughout everything and had great things to say about the classmates who were with him throughout his journey.

“They are wonderful, we had a lot hard workers in our class. I feel like I put in some hard work, but some of these kids, and I’m not afraid to say this, out did me in raw dedication on improving themselves,” said Erik.

Something else that led Erik to so much success was the amount of incredible teachers who helped him out a long the way.

“The amount of communication that goes on between the faculty and students is astounding, it just really helps to have that support from somebody who is trained to educate,” said Erik.

His parents were happy to hear that he was named valedictorian and said his different way of thinking was key to his success.

“We are super proud of him, to be valedictorian is a great accomplishment. He comes by it kind of naturally so I don’t know how much I can comment on how much hard work he actually put in,” laughed his father Jeff.

“He’s just got a unique mind. It’s kind of like a steel trap. He remembers what he reads and what he hears.”

Erik is spending the summer working for the city before heading south to Brigham Young University in Provo, Utah.

At the moment, he is enrolled in general studies, but plans on pursuing a career in mechanical engineering. A possible goal of his is to attend the MIT School of Engineering.