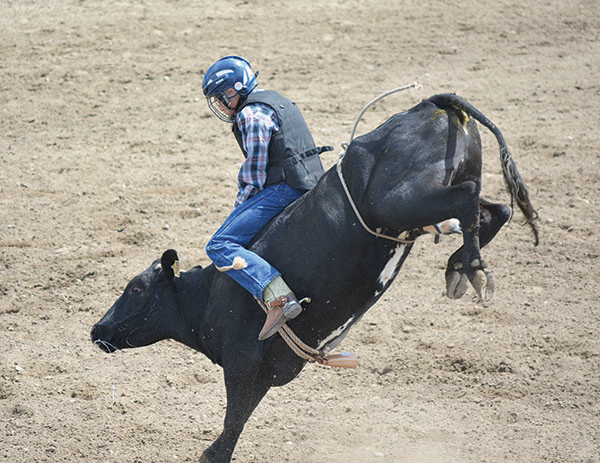 It was a scorcher of a day last weekend in Raymond, but the cowboys and cowgirls kept things cool as raging bulls and wild like horses were kept under control.

The 114th Annual Raymond Stampede kicked up dust as people from all over joined in fierce competition for some good old fashion rodeo.

People filled the seats. Local competitors were met with eruption, the li’l rascals created spurs of joy and the toughest of men and women were glorified.

Robert Heggie, a former pro in steer wrestling and president of Raymond Stampede and Race Meet, was handed the reins to this year’s stampede by his late father Alan, who passed away this time last year.  His wife Lauren Heggie does the marketing for the event and spends a lot of her time helping out with whatever she can.  She is extremely proud of all the work he put into the rodeo and how it turned out.

“He’s very busy with our trucking business, but takes a lot time away from that to dedicate his time to the stampede. I’m really proud of him being able to do that. It’s his service to the town and he really enjoys it,” said Heggie.

Robert can’t say enough about the Raymond Stampede committee and the volunteers who have helped make this possible.

“We have great volunteers, we only had a handful of organized volunteers (to start out with), but when it came to show time, somewhere from 20-30 people stepped up,” said Robert. “There’s the gate keepers, the citizens on patrol and the arena staff. They’re all very good.”

As Stampede manager, Robert put a lot of planning into the event and is already thinking about what he needs to do for next year’s stampede.

“We start planning probably next month for next year. We start working on sponsorship, we start working for the towns and different things like that,” said Robert.

This time of year is a special time in Raymond. Most people have grown up there and all seem to share that sense of community. Getting to see families and friends is what Robert thinks is the best part. He feels the rodeo has sometimes been a link that keeps bringing people back.

“First of July brings everybody home and I think the hub of the wheel is the rodeo. The (rodeo) was the first ever event on the July 1 program back in 1902,” said Robert.

Cowboys are known to be some of the world’s toughest athletes and it was apparent throughout the weekend. These competitors risked serious injury for the love of the fight.

“They bring that old school cowboy atmosphere with them. Cowboys always have a heart of gold and they do it (compete) because they love it. It gets in their blood and they keep coming back,” said Robert.

Brody Zaremba is a 14 year old out of Raymond. He’s been steer riding for years and says although there is a definite risk in riding, he really enjoys the challenge.

“They’re hard to stay on. They’re bigger and a lot stronger than you. It’s pretty dangerous because they can step on you and really hurt you. But I love the rodeo and I love riding steers,” said Zaremba.

The Raymond Stampede is known for being the oldest professional rodeo, having started a full decade before the Calgary Stampede. It was first held on a vacant lot in the year 1902, part of the town’s first Canada Day celebration.

The event has clearly come a long way.

“We put up enough money to make this attractive. We’ve got a good facility and arena, we have contractors and lots of help,” said Robert.

The two day event brought in people from all across western Canada and the United States. It brought the community together with good food, friends and family and the toughest of competitors.  Canada Day brings a special component to Raymond and you know folks in the town are looking forward to next year.