A Magrath local gets a 50 second shopping spree 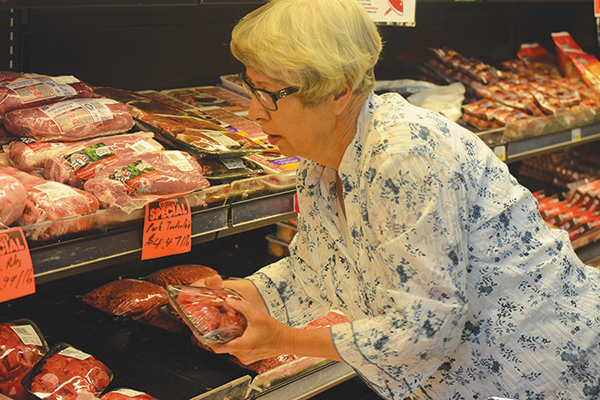 One Magrath woman got an opportunity of a life time when she got a free pass on a grocery bill.

Ila Ehlert had her running shoes on as she raced around Rooster’s Country Market Place for 50 seconds trying to fill as much food as she could into her cart.

Ehlert won a draw from Roosters, where she had 50 seconds to grab as much food as she could free of charge.

It was a contest in which all Canadian Federation of Independent Grocers participated in and owner Jay Mackenzie was fully on board.

“I think it’s awesome. It’s great to give something back to all your different customers. They are actually getting things back rather than just always spending money,” said Mackenzie.

Ehlert was delighted when she heard the news.

“I was excited and apprehensive at the same time, but seriously it’s free groceries. I was very excited,” laughed Ehlert.

Ehlert wasn’t about to go into it blindly. She was more than prepared for her shopping frenzy.

“I’ve been in here two or three times practicing. I checked everything out, I timed it and planned how I would cover everything I wanted in the store,” said Ehlert.

It was then where she recognized there was a lot of the store she wouldn’t be able to cover.

“I realized immediately that I would be lucky to get down one aisle in 50 seconds. So I picked out the most expensive and the most useful items,” said Ehlert.

After a few days of practise she finally felt prepared and came up with a game plan.

“I went for the most expensive tagged items I could find. I looked for a combination of the expensive items and some real treats like frozen crab. I tried to get a few of the high ticket items that would minimize my monthly grocery bill,” said Ehlert.

She did just that, Ehlert started in the frozen section before heading to the meats where she stocked up on beef.

She finished up with some key essentials.

Ehlert really enjoyed her experience and was grateful to Mackenzie, not only for her opportunity, but for what he does for the community.

“I really appreciate Jay and how hard he works to keep such a nice store in our town. I really enjoy shopping here and the staff he has here are always friendly and very helpful,” said Ehlert.

Ehlert remembers watching the television show Supermarket Sweep years ago and it made her feel a little more confident.