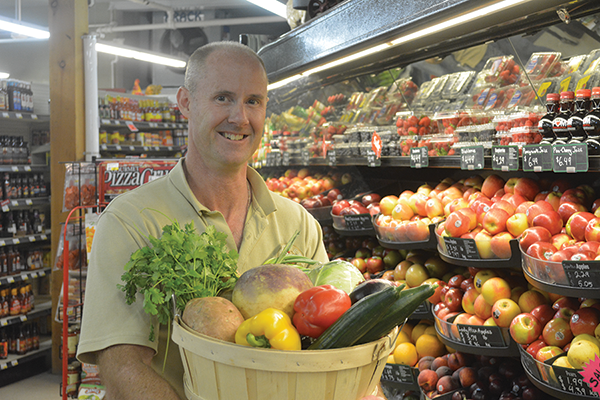 Consuming local fruits and vegetables along with non genetically modified food is the primary message behind a diet that one grocer has implemented into his business.

Jay Mackenzie, owner of Rooster’s Country Marketplace in Magrath, has been a strong supporter of the 100-mile diet.

The idea behind the movement began in 2005, when two Vancouver writers Alisa Smith and J.B. Mackinnon chose to restrict their diet for one year to include only foods grown within 100 miles of where they lived.

Their idea eventually lead them to write a book about their experience.

Although the concept of eating local grown food wasn’t entirely new, the book gained serious traction and rose to popularity throughout North America.

Mackenzie grew up in Vancouver and had seen multiple friends attempt the diet.

When he moved to Magrath about seven years ago, he decided to carry out the idea in his store. It’s something he believes benefits the community in many different ways.

“When we grow our food closer to home, we are less susceptible to foodborne illnesses. We are constantly hearing about giant E.coli or salmonella break outs. It just doesn’t affect a few thousands of people but hundreds of thousands,” said Mackenzie.

He says local food provides fresh products that are not preserved in a way that could potentially harm people.

Paul de Jonge, owner of Broxburn Vegetables and Cafe just outside of Coaldale, has been providing produce for Roosters and lives by a similar philosophy.

“Imported food is prepared to last longer so it tastes different. That’s why people like to come out and pick their own strawberries. Local food is more fresh and just simply tastes better,” said de Jonge.

Mackenzie adds he believes the system is broken and the 100-mile diet is a movement that helps change the direction on how people obtain food.

“We are in an area where mass farming is sort of the norm, but at the same time what’s interesting in this community and surrounding communities is we’ve got a culture that came from almost a pioneering type background. So they had to learn how to grow their own,” said Mackenzie.

Not only is it good for consumers, but local business are profiting from the concept rather than seeing major companies make all the money.

“The funds are going to a small business owner, they are not disappearing to a corporate giant who is either in Toronto or maybe even in the US somewhere. A lot of the time the funds aren’t even staying in Canada,” said Mackenzie.

Mackenzie adds the 100-mile diet is tough to live by, but encourages people to give it a shot.