A high profile politician makes a pit stop in Magrath 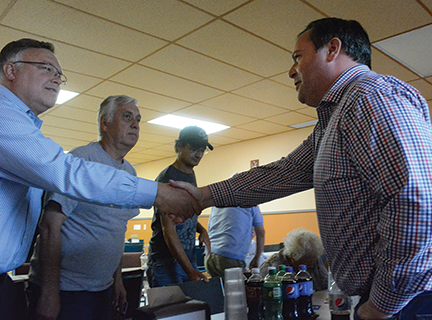 Politician, Jason Kenney, made a pit stop in Magrath last week to talk about his new vision for Alberta.

Kenny recently confirmed his decision to leave federal politics to try and unite the Progressive Conservative and Wildrose parties.

First on his list of things to do is seek the leadership of the PC party in the upcoming election which is taking place sometime before May 31, 2019.

He stresses the importance of removing the New Democratic Party out of office, before, he believes, they drive the economy in Alberta to the ground.

“I’ve been bowled over by the number of people I have met who are really distressed by the current economic decline. I’ve got grown men coming into my office, breaking down into tears because they lost their jobs, running out of credit, running out of their savings and running out of hope,” said Kenney.

The unemployment stats came out two weeks ago showing that Alberta has gone from the lowest to highest in the country, while 24 per cent of the youth are unemployed.

“There are many bright people having to leave the province. I have talked to many small business owners who are losing their businesses and thinking about moving to BC or Saskatchewan,” Kenney. “It used to be the other way around.”

He says the amount of new taxes and increases of the current ones that the NDP have instilled in Alberta is making it tough for people to live normal lives.

“They layered taxes onto everything that moves. Higher business and property taxes, high income taxes, higher payroll taxes and the new carbon tax that is going to make everything more expensive like filling up your gas tank, buying groceries and heating your home,” said Kenney.

He adds the job the NDP has done so far is the big reason he decided to leave his federal position to run for leadership in Alberta.

His plan is to knock NDP out of government. Once he is in power he plans on approaching the Wildrose Party and try to unite them with PC Party.

“The PC’s have a rich party, but they have fallen off track. They lost track of their best values and frankly many people have said they have become arrogant and out of touch. That’s the reason they got kicked in the pants in the last election,” said Kenney.

He says there are a lot of good people in the Wildrose Party, but is worried that if the PC’s and the WIldrose run against each other, rather than against the NDP, the NDP could win the next election.

“That is not something I am prepared to risk over a legacy, brand and prestige egos. My message to people is to park all of that. We need to put the province first” said Kenney.

Kenney has a lot of work ahead of him, but is confident that if he can obtain leadership with the PC Party in the next election, the same people who would have voted him in will vote in favour of uniting the PC and Wildrose parties.