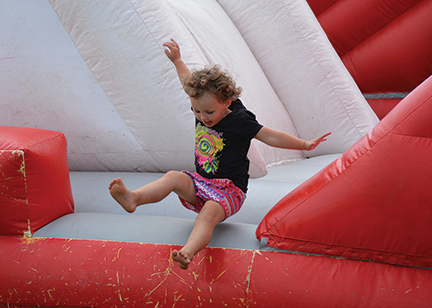 Chautauqua 2016 rolled into town to celebrate, according to their website, the many who came to this area by foot or train from different parts of the United States to build uniquely designed communities, establish much-needed irrigation and create new enterprises where only prairie existed.

Each community hosted a day of events starting last Wednesday in Stirling, Thursday in Magrath, Friday in Raymond and Saturday in Cardston.

Some of the highlights included in the day’s events were the Variety Show & Eric Braun’s Band, the Trevor Panczak concert, the Jason Lyle Black concert and the Chautauqua Musical in Cardston.

Laurel Bennett co-organized the event in Magrath and was really happy with how it turned out after a little bit of a stressful period.

“The community has come out and it’s really been wonderful. At first I was a little discouraged because I didn’t know how to get the word out, but once the word got out, the interest was there and the day turned out great,” said Bennett.

Braden Simpson, was one of the organizers in Raymond and said there was a lot of work that went into Chautauqua.

“We’ve been planning this for quite a while and I think it went great. The rain caused some of the activities to be moved from Victoria Park to the Ag Society building, but that actually worked out to our benefit because everything was closer together,” said Simpson.

The support from the community was evident in each town/village and Raymond was no different. Simpson said there were at least a 100 people at any given time on the grounds.

“I think most of the people are from Raymond and we are even seeing a few people from further areas such as Lethbridge who came out. It’s great to see people here with their families enjoying the activities,” said Simpson.

Chautauqua would have never happened without everybody who volunteered and those you worked hard to ensure its success.

Bennett admits it was a little tough at the beginning getting people on board, but said they stepped up when it was needed and their help wasn’t overlooked.

“It was really slow at getting volunteers at first, but all of a sudden during the last two weeks people were calling me up and asking me what they could do. I told them things they could do and they did it.

They were great,” said Bennett.

Chautauqua will be back next year during the same time.