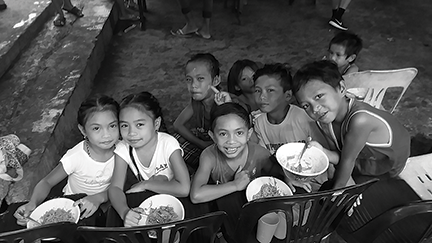 In 2014, Jonathan and Carol Jensen and their two children packed their suitcases and moved to Manilla, Philippines.

Jonathan’s company moved offices abroad, so the family thought it was a good choice to go with him.

They were nervous, but at the same time, they were looking forward to the unknown.

Their children Camille and Joshua, weren’t there the entire time, but they did get to experience what the country had to offer.

It was an adventure to say the least and it took some time getting used to living overseas.

Carol says there was a definite honeymoon phase that her and her family experienced, but they soon began to miss the luxuries of home.

“Reality starts to hit and you’re trying to adjust. You don’t know where to pay your bills, you don’t realize how long it takes to buy your groceries or get anywhere because of the traffic. My expectations were different,” said Carol.

It was Jonathan who had to remind Carol the culture there was more laid back and deadlines weren’t met at the same standards of home. Once she gave into that concept, she began to see things differently.

“That was a wonderful wake up call for me. After that, I was able to just let go and enjoy the experience a little bit more. I realized that I would be okay. I started to know where to find services, I knew where to pay my bills and where to get groceries,” said Carol.

Once she got her feet planted, Carol found opportunities to serve both in the church and the community. Her experiences were really fulfilling and took up a lot of her time.

“I was a little bit afraid of going over there and not having enough to do. I actually brought a few projects from home to keep myself busy, but I was so busy with community service work and building relationships, I didn’t get to work on those projects as much as I thought I was going to,” said Carol.

Carol volunteered with the youth in her church. She helped organize a youth conference for about 150 young men and young women between the ages of 14 and 18 and says it was a blast seeing how eager they were about everything.

“They were so wonderful. There were such keeners, they were just so enthusiastic about learning things. Some of the workshops we set up for them included preparing for job interviews, learning how to budget their money and how to plan for life through post-secondary education,” said Carol.

She also spent time with the Alabang Ladies International Group. ALIG is an organization that helps children and families living at the nearby dump.

Carol spent many Friday mornings there helping young children and their families.

“The little ones would come for a bath and a hot meal. We would brush their teeth and would spray their hair with detangler, which had tea tree oil in it so they wouldn’t get lice. The boys would get their hair gelled and the girls would get their hair braided. It was something that made them feel really special,” said Carol.

From a very young age the children who lived in the dump learned ways to avoid danger in the forms of rabid dogs, diseased animals such as rats and cats and scattered glass. The disparity was something that really touched Carol.

“It was hard on the heart to see such poverty and to know I had a comfortable, air conditioned bedroom to sleep in. I had clean water and never had to worry where my next meal was going to come from. It was really hard to see these children and the families living like that,” said Carol.

Carol also volunteered with a French organization called Virlanie Foundation. They were a foundation who would tend to patients who were either suffering from severe mental disabilities or children who were abandoned. Carol, along with other group members, would sing to them and teach them children songs. It was about the only interaction they got from outside people.

“One little guy I met was only six months old and his birth mother was a professional baby maker. She tried to sell him to a social service worker for about $100 Canadian. That was how she made her money. It didn’t matter who bought the baby,” said Carol.

These types of situations became familiar to Carol, but it never got easier for her.

Although she spent a lot of her time volunteering, Carol had the opportunity to travel the country and was fascinated with the beauty of it.

“We did a fair bit of scuba diving while we were there and the water was just phenomenal. You could see everything from turtles to dolphins and even whale sharks,” said Carol. “On the beach, we were sipping coconut juice straight out of coconuts. We ate mangos fresh off the tree any time we wanted to.”

By the end of her stay, she built so many relationships, learned the language and really embraced the culture. The idea of her coming home was a little tough for her.

“I hated the thought of leaving. I think it’s inevitable that when you go somewhere and you fall in love with the people you’re serving. We want to continue those relationships,” said Carol. “Even though my kids were here (Magrath) along with my friends, I had a home there too.”

There has been an adjustment period for Carol being home and it’s something she is still getting used to.

Carol’s husband Jonathan is still over in the Philippines and his contract has been extended for another year. His contract expires on September 1, 2017. Carol admits it will be a challenge being so far away from each other, but knows their love for each other is strong.

Since returning in July, Carol has kept busy with canning, quilting, serving the town and focusing highly on her children. She has registered full-time at the University of Lethbridge with the dream of someday becoming a teacher where she would like to work with teenagers.