End of season celebration in Stirling 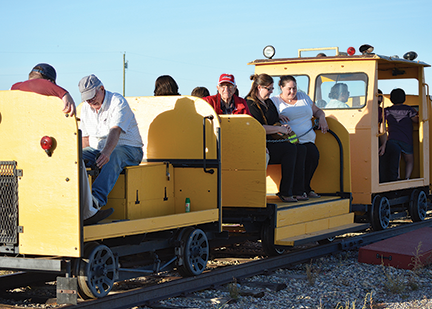 Another season for the Galt Historic Railway Park wrapped up last weekend in Stirling with food, tours and a speeder ride.

It was the end of the season barbecue and many members of the community and visitors as far from Lethbridge gathered to celebrate the society and everything they have done this summer.

The event was put on by the Great Canadian Plains Railway Society as members gave up their time to show how grateful they are of the continued support they have seen from the community.

The park is open every summer from the beginning of June to the end of August along with the odd time throughout the year. Geoff De Boer, president of the GCPRS, says it’s always nice to give back to the people who come out and share the historic site.

“It’s the last weekend that we are open, so we had a barbecue for people who have volunteered and the friends association to show our appreciation to the village and everybody who has supported us over the summer,” said De Boer.

The event featured great food prepared by De Boer along with tours by Treasurer Bill Hillen and then finished up with rides on their train, which the children really seemed to enjoy.

De Boer loves history and has really enjoyed being involved in this society. He continues to find ways for people of all ages to get excited about the significance of the GHRP.

“Young people don’t always realize the importance of the railway. Years ago, everything was done through the railway. We didn’t have roads and (Sir Alexander) Galt built his railway from Great Falls to Lethbridge then from Lethbridge to the other side of Medicine Hat,” said De Boer.

This year the GHRP has been involved with the Chautauqua events, Mother’s and Father’s Day along with a Victorian Christmas in November. The support De Boer has seen from the community has been something he really admires.

“We have a fairly large crowd that usually come out to those events. Last year for the Victorian Christmas, we were packed for the entire three days. The support from the community is always strong around here,” said De Boer.

The train station was built in 1890 by Sir Alexander Galt along with his son Elliot. It was originally built on the border of Coutts, Alberta and Sweetgrass, Montana.

The station closed down in the late 1960’s before being bought by GCPRS in the year 2000 and was restored back to its original state in Stirling and then opened to the public in in 2005.