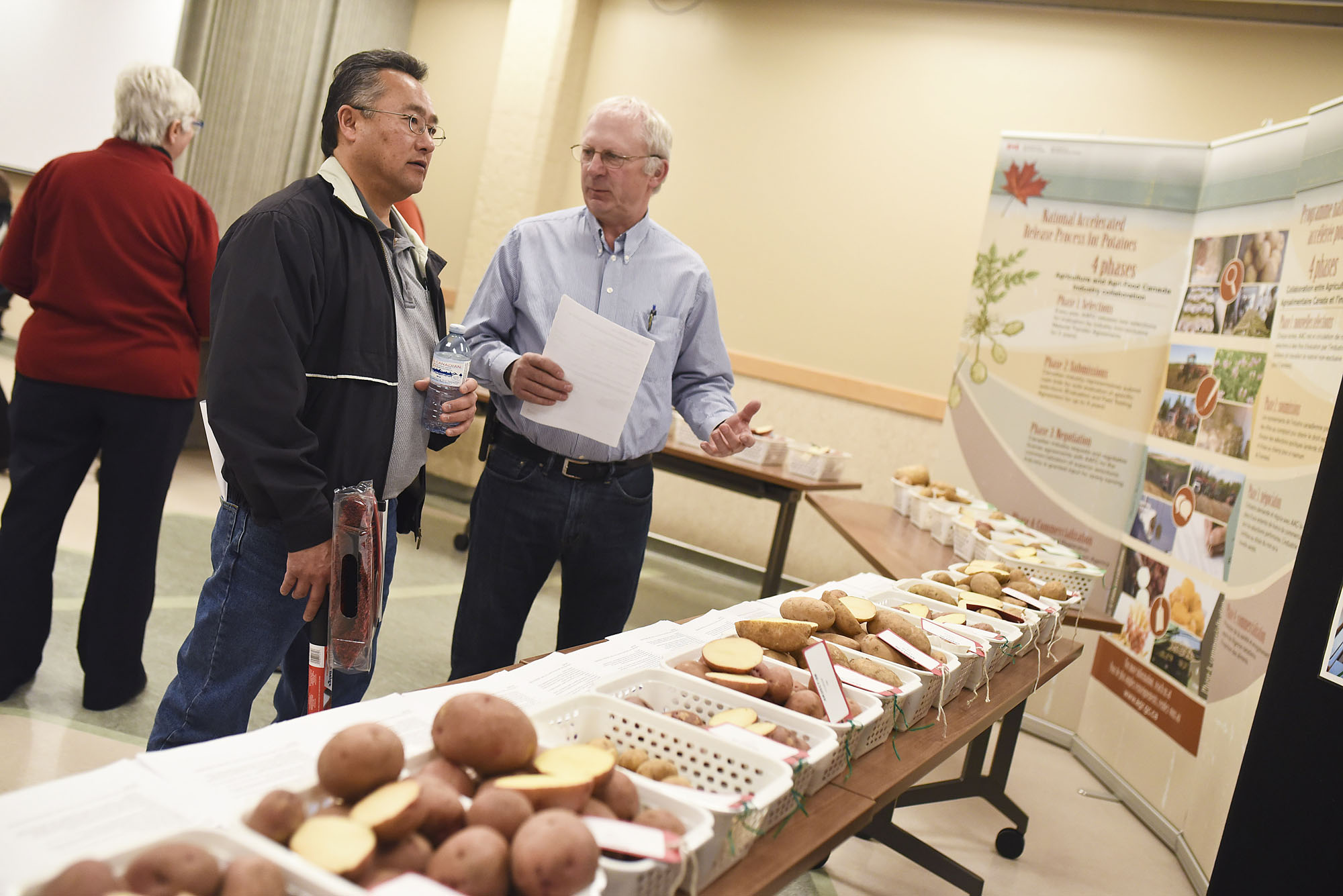 © Lethbridge Herald photo by Tijana Martin Terry Morishita, left, and Ludwig Reicheneder chat while browsing through the 15 new potato varieties that are being released by Agriculture and Agri-Food Canada this year during a potato release open house event at the Lethbridge Research and Development Centre on Wednesday. @TMartinHerald

Red-skinned potatoes are sure to be on the minds and menus of many after remarkable results shown by Agriculture and Agri-Food Canada’s selections this year.

Red-skinned varieties made up half of the total selections AAFC breeders released to industry during the annual Potato Selection Release Open House last Wednesday.

For the first time, the program will unveil a multi-purpose red-skinned selection, showing promise for processing as wedges and as a traditional table potato.

In all, 15 selections were displayed this year by the AAFC breeding program for industry representatives.

The selections were narrowed down from more than 100,000 hybrid seedlings grown, tested and measured over six years in AAFC greenhouses, laboratories and fields across Canada.

For close to two decades, the province has participated in variety variation with the federal government by hosting regional trial sites.

The plan is to provide regional data for varieties that have been developed for Canada to ensure they are well-suited for production in an area.

“We are well-positioned to do it because we are an impartial evaluator,” said Michele Konschuh, a potato research scientist with Alberta Agriculture. “We’re not the breeder of the variety, or the end user of the variety, but we work with both sides.”

Culinary evaluations are also part of the trial.

For the chipping industry, valuable traits include high specific gravity, a nice, uniform size, a good yield, resistance to pests and diseases, and storage characteristics. They also have to make fabulous chips.

For the french fry industry, valuable traits include a good shape, high yield, high specific gravity, they can’t use a lot of oil and they need to be able to store well.

For fresh market varieties, appearance and taste are of primary importance, as well as correct sizes for bagging.

“There are many different attributes, different varieties and different shapes for each of those,” Konschuh said.

The potato industry in southern Alberta grew significantly with the introduction of the McCain and Lamb Weston facilities around the turn of the century.

With the planned Cavendish expansion into the area and the reduction of acreage and plant closures in other parts of the country, Alberta is in a unique position for growth.

These days, there is a lot of environmental focus from consumers and that has some growers looking for potatoes that are better users of water and nitrogen, and more resistant to pests and diseases on their own, so fewer chemical controls are needed.

A big difference between potatoes and other types of crops is that potatoes are sold by variety and are not commodities.

“Growers don’t get to select the variety they grow because they like it best,” she said. “It’s about the buyer. It’s about who is going to utilize the potatoes and what’s best for them.”

“The challenge with the potato industry, as with any industry, are the changing factors,” said Terry Morishita, field consultant for Old Dutch.

“We are selecting varieties that are easier to store, and easier to process, which saves everybody money, too. We try to get a really nice quality so it’s aesthetically pleasing to the consumer as well. That’s what every company is looking for, and that’s what we’re competing against so the consumer will buy our products.”