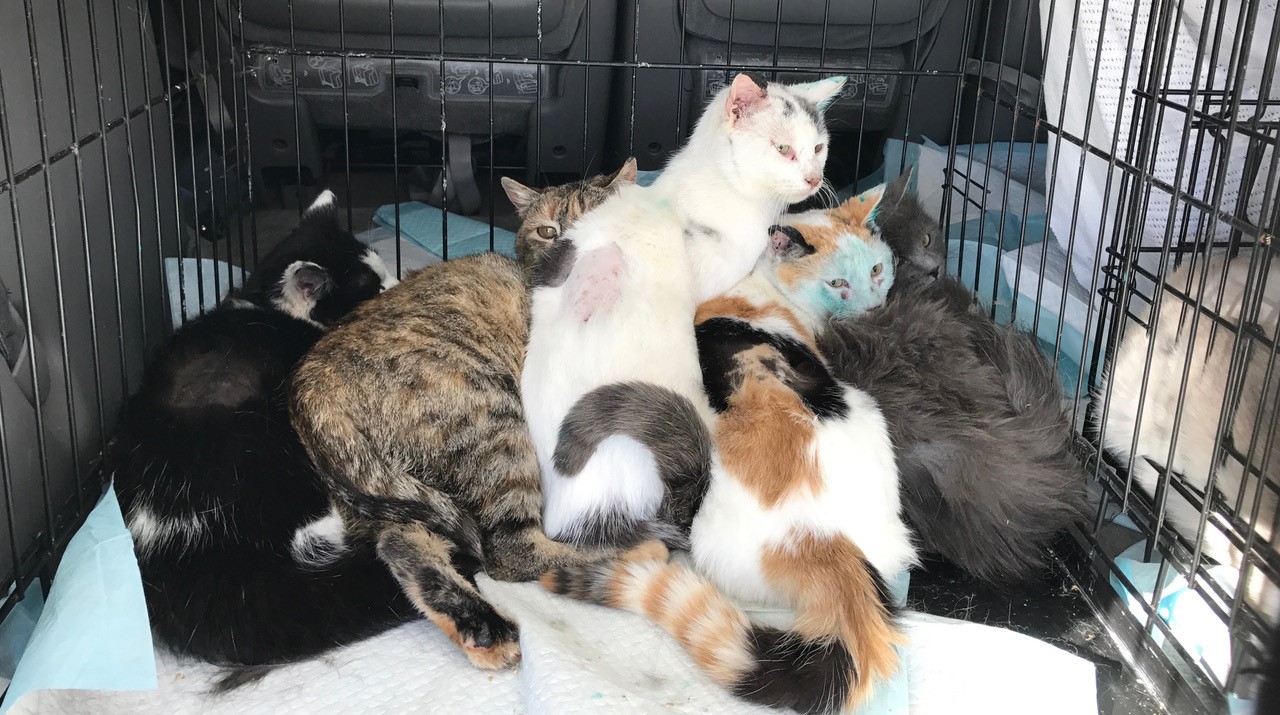 “Help control the pet population. Have your pet spayed or neutered.”

Most likely remember that very popular Bob Barker send off from the popular television show, The Price Is Right.

In The Town of Magrath, a group of dedicated volunteers are taking Barker’s advice to heart. Pound Rescue, Magrath, a division of the parent organization, Pound Rescue, is doing its best to control the cat population in the community.

“We hope for a future without homeless cat on our streets,” said Angelina Robillard, who moved to Magrath last year with her husband and two children. “However, this future is only attainable when every resident becomes a responsible pet owner and spays/neuters their cats, especially those allowed outdoors, as any unfixed cat allowed outdoors and allowed to roam has probably added to our homeless population of cats.”

Robillard’s family has been a foster home and has volunteered with pound rescue for 15 years, helping to re-home homeless and abandoned animals.  When they arrived in Magrath, they noticed a familiar issue.

“We noticed not just around our house, but also around town many cats, and kittens, out freezing in -30 weather and, like most people, we cannot sit back and watch animals suffer,” she said. “I expressed what is happening out here to the board of Pound Rescue and its founder, also a close family friend, and they gave me the go ahead to start controlling through TNRM (trap-neuter-release-maintain).”

And with that, the Magrath chapter of Pound Rescue began.

“The important thing we want to get across is for Magrath to understand is that we are not here to take away these cats, however, just prevent more cats from being born, and give the ones we have already forced to live this life one that is at least as happy and healthy as they can be while living on the streets,” said Robillard, who added donations to the group are always welcome. “We can only keep going so long as funds are available. There are also many ways people can help or get involved if they are willing.”

Robillard added Magrath has a very large population of stray and abandoned cats.

“These cats are not on the streets living this life because they have chosen it,” she said. “Cats that are condemned to a life on the streets suffer greatly when not cared for. These naturally-domestic animals have a life of pure survival daily, many are starved, have frozen off ears and tails, are malnourished and have parasites.”

They usually die a painful death in the end, she said, and added a major reason to start controlling through TNRM in any town that has an overpopulation of community cats is it the only proven and humane way to control the overpopulation of cats.

And while the rescue’s time and donations at this time are going towards the fixing and maintaining of the overpopulation of Magrath cats, the rescue will take in homeless or abandoned dogs.

“They will be taken into our parent organization in Okotoks and fostered and adopted out into a forever home from there,” said Robillard. “Taking in dogs or cats depends on space available, and also a bit on circumstances. We do not just want to be an easy way out of dog or cat ownership. On the other hand, we try to help those who are struggling to meet ends to be responsible owners.”

Thus far, the rescue group’s traps have been on private property, with permission of the owner.

“If we trap community cats that we feel have an owner, we would look for this owner,” said Robillard, who added the entire process is very time consuming. “It involves a lot of hours. I am blessed with a supportive and involved husband, amazing kids, and a healthy pregnancy to have the energy to tackle all this.”

All of those hours have helped the rescue reach a milestone, early in the group’s existence.

“We will soon be reaching community cat number 50,” said Robillard. “What TNRM involves is getting to know a cat colony, know the cats and with how many we are dealing. My involvement thus far has mainly been humanly trapping and monitoring traps, caring for the cats before and after their surgeries and also taking them to and from the vet.”

The next step involves ensuring the cats are released to a location where they will be provided continual food, water, shelter and a source of heat to live out their lives.

“We will always strive continually to give these cats somewhat a decent life,” said Robillard. “There is no luxury for these outdoor cats, but all will be provided their needs and must be treated with compassion. We, Pound Rescue Magrath also have pregnant mama cats and kittens that need to be socialized and in a home until they can be placed for adoption.”

There are a lot of people in Magrath who have the welfare of animals at heart, according to Robillard, who added the rescue group is only one part of the animal-control puzzle.

“We really want the community to feel the responsibility of caring for these animals, as they are the community’s animals,” she said. “Magrath is a small community, and with everyone’s help, a difference can and should be made so easily.”

The Pound Rescue is 100 per cent volunteer based, as Robillard added the group has some amazing caregivers of its community cats.

“If people truly cannot financially afford to have their animals fixed, and so long that there are funds available, we will help financially to get them fixed as well. We are a small organization, we do not have the funds big rescues or humane societies have, but we would rather invest in the prevention of more litters than taking in cats or dogs for whom in the end there will not be a home, because of overpopulation.”

For those looking to help, Robillard added there are many ways to get involved.

“Everyone who wants to help, can help. We are in continual need of cat food, litter, anything that can be used as bedding, as well as monetary donations. Pound Rescue has set money aside to help these cats; however, we hope to raise $10,000 to help every one of our community cats, now and of course ongoing. Vet bills are expensive.”

Pound Rescue can be contacted through email angelina@poundrescue.com or the Facebook page (Pound Rescue Magrath). Those looking to make a financial donation can do so by cheque or via http://www.CanadaHelps.com.