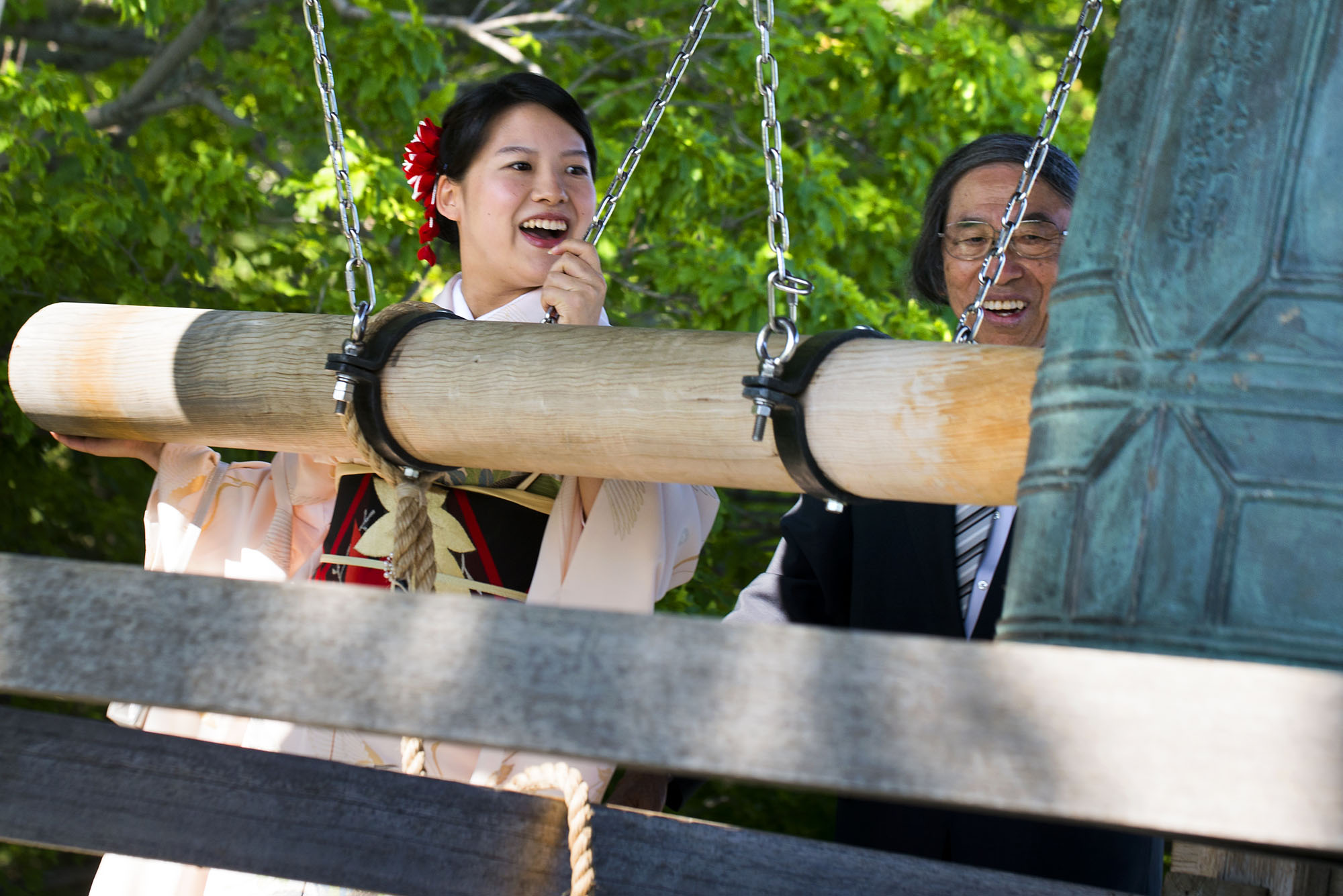 Herald photo by Ian Martens Her Imperial Highness Princess Ayako of Takamado rings the Friendship Bell alongside Masami Sugimoto while on a tour of the Nikka Yuko Japanese Garden Friday morning as part of the gardenÕs 50th anniversary celebrations. @IMartensHerald

Nikka Yuko Japanese Garden formally celebrated its 50th anniversary on Friday with a full day of events and ceremonies that included a member of the Japanese royal family.

John Harding, chair of the Nikka Yuko 50th anniversary committee, said the garden is meaningful because of the deeply-rooted connections between Japan and Canada Ð particularly in the Lethbridge region.

On a private tour of the facility, Her Imperial Highness was engaged and interested in the different parts of the garden, taking time to read on the history of the garden, hear stories about the different features and even taking part in ringing the Friendship Bell. She also took part in a plaque unveiling to commemorate her visit.

Harding said he was happy to see the princess enjoy the space.

“We love the garden and appreciated it for a long time,” he said. “But you appreciate it even more when you are able to see someone come in from the outside.”

In addressing those in attendance, Takamado called her visit to Lethbridge a “beautiful pleasure.”

“This is my very first visit to Lethbridge,” she said. “I had been looking forward to it very much.”

She said her parents fondly remembered their visit to the city in 1992, and conveyed her mother’s best wishes to the city.

Her late father studied at university in Ontario and came to consider Canada a second home during his time there.

“He always said that it was in Canada where he learned the true meaning of living together in harmony,” she said. “And the importance of respecting different cultural traditions and values.”

Takamado attended school in B.C. for English studies and as part of her work towards a master’s degree in social welfare.

“(I) fell in love with Canada,” she said. “Words simply cannot express how happy I am to be on Canadian soil on this special 150th birthday year.”

She referred to Nikka Yuko as a living monument to the friendship between Japan and Canada.

“It is wonderful to see that the garden has been looked after with such loving care and attention,” she said.

Mayor Chris Spearman previously met with Takamado during a trip to Japan, and on Thursday night a reception was held where he spent more time with her.

“She’s very approachable and very friendly,” he said. “She loves mixing with people. It’s fantastic to see that.”

“She’s wonderfully warm and engaging, which is delightful for us as hosts for this event,” said Harding.

“She has strong connections to Canada, and is familiar with some of our less formal ways. I think some of that comes through in her open, engaging and friendly manner.”

Lois Mitchell, Alberta’s Lieutenant-Governor, said the presence of the Imperial Princess was an honour.

“I know she is already very familiar with what we think of as the typical western Canadian personality ” Mitchell said. “Which is to say, friendly, welcoming, energetic, and innovative. These traits are what we are celebrating today.”

“This garden is a perfect symbol of the Japanese-Canadian spirit.It was built through cooperation and friendship. Great thought and planning went into it, so that it would be so world class.”

She went on to say the garden has been a source of reflection, beauty, and serenity for every visitor over the past 50 years.

“All of these are admirable qualities,” she said.

“They are becoming part of our culture as more of us value the Japanese aesthetic.”

“The Nikka Yuko Japanese Garden reminds us of the incredible and unique culture and beauty of Japan that Nikka Yuko has brought to Alberta,” said MLA Maria Fitzpatrick.