Take a train ride into history 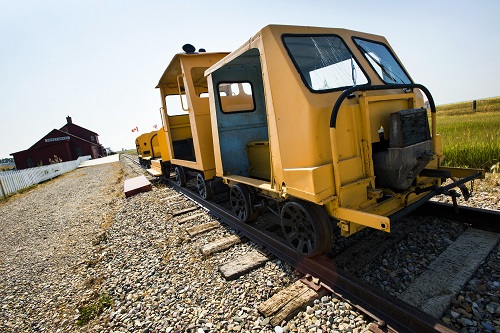 Herald photo by Ian Martens The Great Canadian Plains Railway Society will be making rides available on the speeder cars this summer at the Galt Historic Railway Park in Stirling. @IMartensHerald

The Galt Historic Railway Park is chugging along toward an official historic railway designation, and this summer visitors can take a ride on their rails.

“We are dedicated to the rail history of southern Alberta,” said Bill Hillen, treasurer for the Great Canadian Plains Railway Society.

The primary building is a train station which includes the original customs and waiting room areas. The waiting room is about two-thirds of the way through the building and was bisected by the Canada-U.S. border from October 1890 to September 1916.

The building was purchased in 2000 and moved to a 35-acre site located one kilometre north of Stirling. It has since been completely restored.

Other installations on-site include one of the last wooden cabooses owned by Canadian Pacific from the 1940s, a livestock car, four coaches Ð one of which is a school car, a rare historical event which took place during the steam era.

“At the other end, we have a display of rotary dial telephones, which are a mystery to young kids today,” joked Hillen.

The site also holds a number of other installations to explore. In addition, visitors can take a ride on a speeder car across the border marker like they would have back in 1890. The track was hand-laid. The speeders will be running Saturday and July 29, and Aug. 19 and 26.

A change in designation resulted for people who had rails on their property and were offering train rides to the public.

Hillen said these regulations “caught up” to the park.

“It wasn’t there when we started,” he said.

Essentially, these historic sites have been brought under the umbrella as part of the system in place for Transport Alberta. This means a designation was needed for the park to operate a small speeder ride on a piece of track.

“It brought us into the same category as all of the heritage railway lines, such as Heritage Park (in Calgary),” Hillen said.

“It brought us into a different aspect of what we’re doing.”

That designation operates as check and balance to ensure properly certified people are operating the vehicles and that proper inspections are maintained.

“Our feeling is that the focal point of our project here has been the development and restoration of (what may be) the only international point of entry by rail to Alberta in its history,” Hillen said.

“What better experience than to be able to cross the international boundary?”

Future plans include restoration of a 1918 railway post office car, and a 1920 tourist-class coach which is being converted into a diner, and an early 1950s baggage car which had been converted by CP into a railway kitchen car for their work crews.

“It went out to where they worked, so they could have something to eat,” he said. “We’re tying those together.”

The group is always looking for help.

“We are a registered charity, and we issue tax receipts for donations,” said Hillen. “And we’re always looking for volunteers and members who would like to be involved.”