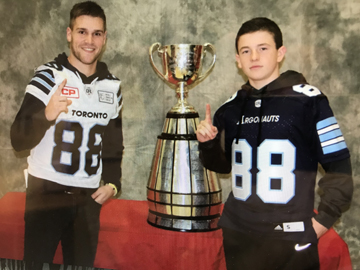 Students in Raymond were given a photo opportunity with Ralph and the Grey Cup.

Toronto Argonauts wide receiver Jimmy Ralph brought his team’s Grey Cup victory home to Raymond High School, where it all started for him.
Ralph, who graduated in 2011, brought the cup to his old school on Feb. 13, a visit arranged by football coach Todd Heggie.
Canadian football runs in the Ralph family — Jimmy’s brothers, Brock and Brett, are also Grey Cup champions, having won it with the Edmonton and Calgary teams.
Jimmy reached out to Heggie almost immediately after the Argonauts’ victory over the Calgary Stampeders.
“After he won the cup, he messaged me … within about an hour and mentioned that he would be getting it for a day, and when he got it if we would be interested in bringing him to the school,” said Heggie, who coached Jimmy when he was a student.
There was a huge turnout to see the CFL star, who won the cup as a rookie, at the school.
“We had probably 1,000 students there and he did a real good job talking to them, and had them all engaged,” Heggie said.
“He talked to them about the journey it takes from when he started leading his university football (team) and some of the obstacles that he faced, and injuries that you might face and how he overcame them until they won the cup.”
Jimmy played and studied at the University of Alberta.
He also discussed perseverance and goal setting with the students.
Heggie said it’s important for students to hear from successful alumni.
“He shared the same message that we try to talk (into) them everyday,” said Heggie.
“To hear it from someone like him, they hear a different voice, and maybe they look at it in a different light and learn some valuable life lessons.”