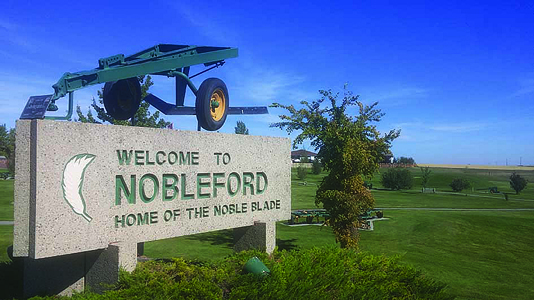 A hundred years ago on Feb. 28, the Village of Nobleford was founded.
To celebrate that milestone, the village held a birthday party that day this year.
“I want them (people) to come and think of it as a birthday party kind,” said Nobleford Mayor Don McDowell.
“We’re going to do the cake and ice cream thing, we got music and first and foremost that’s what it is, it is a celebration of the – and I’ll steal a phrase from the Centennial Society – ‘100 years of Growing Together’.
“It’s just a way of recognizing, if you and I had been at the 1918 inauguration if you will, of when it all started, his is kind of where you would like to see this go; the village becoming successful, growing.”
Noting that the anniversary makes him feel “a little humbled”, McDowell said that apparently, Nobleford had started with 100 people.
Today, according to the 2016 census, the village population stands at 1,278.
Nobleford is named after Charles Noble, who started a farming complex in the area and became the village’s first mayor when it was incorporated. Noble also created the Noble blade, which was manufactured in Nobleford. At its peak, about 70 men were producing and selling the noble blade.
As agriculture practices changed, the blade fell out of favour, although it is still produced “in a more modern way” by ag-companies.
“When the factories started to decline, so did Nobleford,” said McDowell.
“The late-70s, we were charging along, things were good, and then the decline started, and by 2000, the village was in, I’m going to say though shape. Taxes were high, the infrastructure was in bad shape, the water quality was in bad shape, and the council of the day knew they had to do something, and they did.”
McDowell said first they tackle the water problem.
While fixing that, opportunities arose to send water to Barons and to the North Country Water Co-op, which provided new revenue streams for the town.
“When people talk about what makes a town or a village go, people think of things like swimming pools and arenas and those kind of things. But it’s infrastructure that makes these towns and villages what they are.”
Not long after, they opened phase one of a new subdivision. McDowell had arrived in Nobleford not long after, and he was amazed that a “town so small went out to do these things”.
The subdivision was a success and sold quickly, and the town is currently in phase five which only has a few lots left, and there is a new Netherlands Reformed Church coming which is set to be completed at the end of the year.
“The whole thing just keeps piling onto itself. Our industrial park is full, we have very few if any lots left in the industrial park. Ag Growth International of course took over the old factory, and they now employ 130-135 people full time, and that number balloons to about 250 when they’re really busy,” said McDowell.
“So from a humble beginning of 100 people, we got to a peak of 650, then it kind of stayed there for a long time, just to kind of put a number on it, and then 2004, it took off again.”
McDowell added that the village is currently on track to grow to 1,400 by the end of the year. Additionally, according to census data from Statistics Canada, there is 855 people aged 39 or under in Nobleford.
“We have an extremely young (population). We have just turned the demographic, if you will, completely around.”
The celebration will take place on Wednesday, Feb. 28, at the Nobleford Community Complex. The event will kick off at 6:45 p.m., and will feature a Nobleford Museum Society skit and a plaque dedication, which features the names of all village CAOs, mayors and councilors from 1918-2018, although McDowell says that they’re “not even sure where we’re going to mount it when everything is all said and done”. The Centennial Society will also be hosting a history book auction, and of course, there will be birthday cake.
“This is a very, very successful village. Our infrastructure is in great shape, our demographic, as I said, we have young people like you wouldn’t believe herein town. Nobleford is in very good health,” said McDowell. “If you’ve been there in 1919, with everything that was going on in the world at that time, where we are today would be gauged as a tremendous success.”