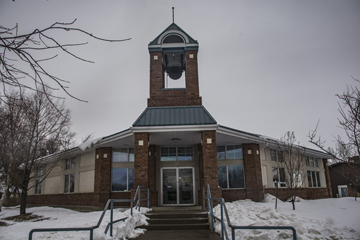 Westwind Weekly photo by Allison Billings Magrath's library is slated to move to its new school after it opens in autumn 2018. The town is holding a public forum on its future, as well as planned road improvements, on March 28.

Jeremy Appel
Westwind Weekly News
Magrath town council has scheduled a public forum to solicit the community’s input on planned road improvements and the library for March 28, which was originally slated for March 1.
Mayor Russ Barnett says the town will have more details about what attendees can expect from the meeting after its next committee of the whole meeting on March 6.
“We’re trying to come up with a road improvement plan and what we’re going to do with the library,” he said.
The library will move into the new school after it opens in September.
“The school will be done pretty quick,” said Barnett. “It may not be until the first of the year, 2019, before we see a movement. It might be before then.
“We’re starting to negotiate a contract between Westwind School Division and the Town of Magrath, because it’s a public library, so they have two different mandates.”
Moving the library into the school will likely involve expanding its hours of operations, since it will serve as both the school’s and a public facility.
Barnett says there’s no direct connection between the road improvement plans and moving the library, except that they are two of council’s major priorities for the next year, as determined in its strategic planning session from six weeks ago.

At its Feb. 27 meeting, council discussed a conflict between its Cemetery Bylaw and the provincial Cemetery Act, which requires the town to update its bylaw.
The matter was brought to the town’s attention by a resident whose family purchased a set of 20 plots at the cemetery for $12 each, which they no longer require.
“The Cemetery Act says you have to pay 80 per cent of market value of whatever those plots are worth,” said Barnett.
“That’s not what the town bylaw says, so we’ve got to bring that into alignment.”
The mayor says this means the town will have to reimburse the family 80 per cent of what they paid for the plots.
This, along with other possible changes to the bylaw that may come up, will also be discussed at the March 6 committee meeting.
Policies motion
Council also adopted nine new policies and one update at the meeting.
“We ask our staff to go over a few policies all the time, just to make sure they’re updated and current,” Barnett said.
He said Coun. Richard Van Ee brought these policies forward at a past committee meeting.
They are — the Boulevard Tree Care, Irrigation Water Rationing, Traffic Violations, Accrued Vacation, Administering of Medications, Nature Trail Penalty, Utility Account Arrears, Fire Hydrant, Sidewalk-curb Repairs, and the Table and Chair-use policies.
All except for the Boulevard Tree Care were new policies.