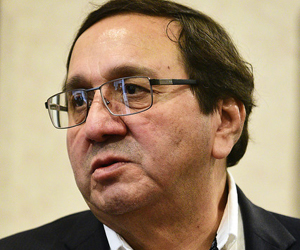 A state of emergency has been declared on the Blood Reserve in response to a large number of drug overdoses in the past week.
Chief Roy Fox made the announcement Friday afternoon in Lethbridge.
“We have listened to the recommendations É to the advice of those involved, in trying to combat the crisis we are in as a result of drug abuse,” he said. “We are hearing recommendations from our people.”
There have been more than 30 overdoses and at least one death in the past week, as a particularly strong mixture of fentanyl has hit Blood Tribe communities and Lethbridge.
Chief and council has authorized additional funding in the amount of $750,000 as well as additional manpower to assist in dealing with the crisis. He said chief and council will also seek funding assistance from the provincial and federal governments.
“Our combined financial and human resources will be developed further and devoted to the short- and long-term goal of eradicating the drug problem and its causes,” he said.
Kevin Cowan, a health director for the Blood Tribe, said the Blood Tribe has been able to secure additional ambulances from neighbouring reserves, including a fully-staffed ambulance from Siksika.
“The activity, as an example, over the weekend, we had 150 ambulance calls,” he said.
“If you look at the last week of ambulance calls, that would be as much as they do in a month.”
He said naloxone is being made available from Alberta Health Services in Calgary, and efforts are being co-ordinated through local and provincial departments regarding how to use it.
He said in spite of the bad news, there is a good-news angle to the story as there has only been a single confirmed death in the past week. He noted in the past, there might have been 30 or more.
“It’s a terrible crisis, everybody is working hard, and there is a lot of hurt and pain in the community,” he said. “But we’re saving lives.”
Blood Tribe Police Service Chief Kyle Melting Tallow said police has dispersed more than 50 doses of naloxone into the community in an effort to lend assistance to emergency responders He said information gathered in the Blood Tribe has been shared with other law enforcement agencies, the result of which has led to arrests.
“We’re charged with providing public safety,” he said. “We have a lot of dedicated police officers that come in on their days off to do overtime shifts.”
Fox said both he and council were very proud of efforts from local businesses and private citizens coming forward to take part in efforts to curb the drug crisis on Blood Tribe land.
“Even though it is a sad situation, I feel good in the way everyone has come together,” he said. “Our council, our staff, our entities, and our friends from the outside.”