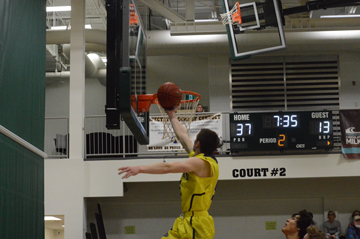 Westwind Weekly photo by Jeremy Appel The Magrath Zeniths took home the bronze medal in the 4A boys basketball provincials in Medicine Hat, defeating Cardston High on March 17. The girls Raymond Comets and Magrath Pandas also participated in the tournament held between March 15 and 17. See page 8 for more photos.

It was going to take a Herculean effort for anyone to defeat the Harry Ainlay Titans at the 4A provincial championships on the weekend in Medicine Hat.
The Magrath Zeniths found that out the hard way, as the south zone champions fell 89-55 to Ainlay Friday in the provincial semifinal.
The Titans would cruise to the 4A title on Saturday with an 86-65 win over Bishop O’ Byrne, as the Edmonton won convincingly in very game throughout the tournament.
But Magrath was able to turn that semifinal disappointment into a provincial medal, as the Zeniths bounced back on Saturday with a 57-48 win over Cardston to take bronze.
Magrath began play on Thursday with an 85-61 win over Lindsay Thurber, and continued that strong play early on Friday with an 88-68 win over Bishop McNally to qualify for Saturday night’s semifinal.
Third place for the Zeniths was the top finish for any local team in the 4A provincials, as both the Raymond Comets and Magrath Pandas left Medicine Hat without a medal in the girls tournament.
Things started out on the right foot for both local teams, however, as Raymond earned an 81-53 win on Thursday over Chestermere, and the Pandas took a 50-48 win over St. Mary.
But it all unraveled Friday for both teams, as the Comets fell 68-57 to Jasper Place in one quarterfinal, and the Pandas lost to Bishop Carroll by a score of 66-53.
Raymond rebounded to post two wins to close out the tournament, as the Comets posted a 78-75 victory on Friday over Western Canada, and a 43-28 win over Lethbridge Collegiate Institute on Saturday.
Magrath’s tournament run ended Friday with a 74-70 loss to LCI.
With provincials wrapped up, Magrath and Raymond players had one more opportunity to hit the court last night in the Southern Alberta High School Girls and 4A Boys Basketball League all-star games.
Pandas coach Brad Karren led one girls team, which included Magrath’s Montana Berezay, Lauren Payne, Adi Strong and Ellie Wilde.
Comets coach Robert Baker coached the other team, which included Raymond’s Halli Baker, Ivy Jansen, Lyvia Jensen and Kansas Long.
In the boys all-star game, Raymond was represented by Parker Graves, Garrett Hasegawa, Jeter Heggie and Drake Still.
Magrath’s representatives included Paycen Blackmore, Taylor Cook, Sam Payne and Mason Stock.
All-star game players were selected by all league varsity head coaches, based on regular-season performance.