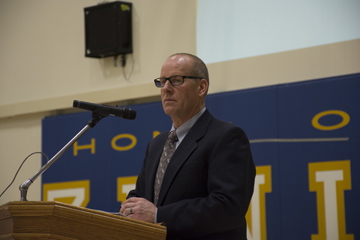 Westwind Weekly photos by Allison Billings Magrath Mayor Russ Barnett addressed members of the community at a public forum on the future of the old library building after it moves to Magrath Elementary School, as well as a potential tax to fund road improvements.

The Town of Magrath held a public forum on March 28 to solicit community input on a potential $12 a month tax for road improvements and the library’s future after it moves to the new school.
Mayor Russ Barnett began the meeting by talking about the library.
Town council wants to know what to do with the old building, he said.
“Different people have said, ‘We don’t have a place to meet in town.’ And so we could re-purpose it as a rental facility that people could use for events,” said the mayor.
Another option is to turn the building into a “business incubator,” which gives community members a location where they can start a business.
It could also serve as the new town hall building or be sold to a private business.
Barnett said the town has had more than one business inquire into whether the building is for sale.
The assessed value of the old library is pegged at $645,870.
One attendee expressed concern that having the public library in the school could disrupt classes, with adults coming and going.
“If you look at the new library, it’s completely self-contained,” Barnett responded, adding that there are classrooms attached to it, but not in it.
“To say there’s not enough space, that’s not true.”
Barnett previously told the Weswtind Weekly that the new library will likely have expanded hours of operation.
The road improvement tax would be applied to monthly utility bills, which would raise $108,000 per year.
“We have almost 50 blocks of gravel in the Town of Magrath,” said Barnett.
“We know they’re not spaced properly. We know how much time and energy and hours it takes to maintain those.
“They’re not great. There’s no question.”
With the provincial government’s funding model, it would take “years and years and years” to pay for the needed improvements.
“Everybody drives on all the roads,” Barnett said, highlighting the importance of getting the upgrades done as soon as possible.
“What if everyone paid $12 on their monthly bill to pay for road paving in the Town of Magrath?”
The funds would go into a Road and Improvement Fund that would be strictly for the purposes of the paving roads in need.
A community member asked what would happen if somebody doesn’t want their road paved.
“I think most people want pavement in the town,” Barnett said to applause.
“We think this is the best plan, the most informed plan that’s ever been presented to the town to make that happen.”