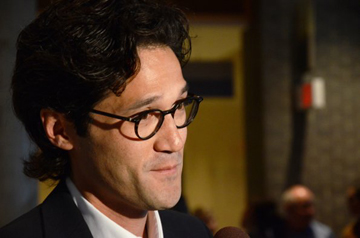 Mark Sakamoto can now add the words ‘national award winning author’ to his resume.
The Japanese-Canadian author from southern Alberta was crowned the winner of this year’s CBC Canada Reads competition Thursday afternoon, after his book “Forgiveness” made it through all four rounds of cuts.
“It’s incredible,” Sakamoto, who hails from Medicine Hat, said. “The books that were up this year were all incredible in their own rights — just all fantastic reads, and they will all do a great job of opening readers’ eyes.
“It’s always a weird thing when you’re comparing art and putting it up for competition, but I’m thrilled to have won, and honoured that it was me.”
Sakamoto was in media lockup when he was announced the winner, with a group of his family members near his side in the audience.
“Everyone found out at the exact same time, so I found out when everyone else did,” he said. “Right after ‘Forgiveness’ won, I was taken out of the room and did a few hours of national media — it was pretty crazy.
“I had some family in the studio audience, so I was able see them very briefly. We had a hug and had a quick cry. It was a lot more emotional than I thought it was going to be.”
Sakamoto’s celebrity panelist for the Canada Reads campaign was Jeanne Beker, someone Sakamoto has grown very close to in the past few weeks.
“Oh my goodness, Jeanne was just terrific,” said Sakamoto. “She really held the book close to her heart, and she really held my family close to her heart.
“The themes that I explore in the book are very central and core to her life, because she is the daughter of holocaust survivors. She lived these things with her family, and she was just brilliant defending the book.”
Though he says he was just happy to be in contention to win the contest, Sakamoto admits winning is a pretty great feeling.
“I did want to win there, I really did,” he said. “When life got hard for me, I had my grandparents there to help guide me through those rocky waters — I was so fortunate they were there in my life as role models.
“A lot of people, when they fall down in life, they don’t have people to look up to and guide them, so I was lucky. Now I get to tell their stories to Canada, and it’s an honour.”
Sakamoto will be back in the region April 23 at Medicine Hat College to meet and talk to readers.