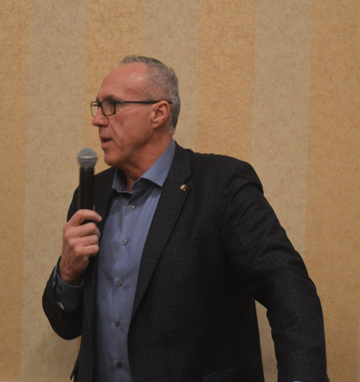 Medicine Hat-Cardston-Warner MP Glen Motz didn’t hold back from making his views clear at the outset of his April 12 town hall regarding the Liberals’ new firearm safety legislation.
“Sorry, this is going to be a very partisan presentation tonight,” he said to applause from the audience gathered at the Medicine Hat Lodge. “I am not in favour of C-71.”
The bill, among other stipulations, eliminates the Firearms Act’s five year window for criminal and mental health background checks, requires verification of a gun owner’s license by the Registrar of Firearms whenever a non-restricted firearm is transferred to another owner, and removes some automatic authorizations to transport guns.
“Licensed gun owners should not have additional burden to lawfully own a firearm,” Motz said. “We have laws in place already that provide a process, whereby people are vetted to ensure that they should own a firearm.”
A former Medicine Hat police officer, Motz sits on the Standing Committee on Public Safety and National Security, which will study and critique the legislation after it passes second reading in the House of Commons.
He’s joined by Liberals John McKay, Julie Dabrusin, Pam Damoff, Peter Fragiskatos, Michel Picard, Sven Spengemann and parliamentary secretary to the minister of public safety Mark Holland, New Democrat Matthew Dube, as well as fellow Conservatives Pierre Paul-Hus and Blaine Calkins.
Motz said the Liberals are punishing law-abiding rural gunowners for crimes emanating from urban areas, mostly with illegally-owned guns.
“When you have a high-traffic area, you’re living in a city or close to a city and you know you’re going to get some dirtbags coming out from town, because they want to borrow your stuff instead of their neighbours’ right beside them, lock your guns up. Transport them safely,” said Motz.
“We know that law-abiding gunowners have not, are not and will never be the problem with our current gun ownership and possession (laws). It is those who choose not to follow the rules.”
One attendee suggested that Canada adopt conceal and carry, which allow citizens to carry a handgun in public in states where it’s law.
Motz disagreed, saying the Canadian gun control regime generally works well as it is.
“Nobody wants to go down the American path of firearm ownership or acquisition or possession,” he said.
“Owning a firearm in Canada isn’t one of the entrenched rights in the Charter, but it’s a privilege, like owning and driving a car … You can lose that privilege.
“It’s a hobby. Some people do pottery. Some people golf. Some people enjoy having firearms and they should have the opportunity to do so if they’re licensed and law-abiding Canadians, which is the process we have now.”