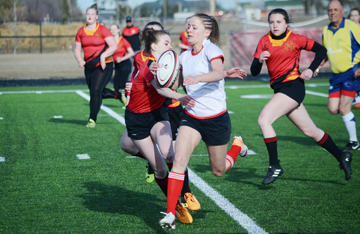 Westwind Weekly photo by Garrett Simmons Sadie Nelson breaks through the Rebels defence as she makes her way down the field.

Once the Raymond Comets began to roll, they became impossible to stop.
Last Wednesday in Raymond, with Taber’s W.R. Myers Rebels in town to open the Southern Alberta High School Rugby League season, an early stalemate turned into a huge Comets win.
The defending Tier 1 provincial champion Comets, and the defending Tier 3 provincial champions from Taber, battled for field position in the game’s first few minutes. But after the Comets came up empty on the team’s first foray deep into Taber territory, Raymond’s speed and strength quickly overwhelmed the Rebels.
The home side scored in quick succession following the team’s first try, and raced to a 32-0 lead at the half before the team cruised to victory.
“Overall, the team played great,” said Comets coach Dan Bikman.
A team that could end up being one of the most talented sides Raymond has witnessed turned in a near-flawless first game.
“It was the best season opener I’ve seen as a coach,” said Bikman. “Credit to the Grade 12 leaders who’ve been working hard in practice and bring a lot of maturity and experience to the season.”
With a win to open the season, Raymond was set to host Winston Churchill Wednesday night. The final score from that contest was not available at press time.
The Comets will face Lethbridge Collegiate Institute next in SAHSRL play, as the two teams will face off Wednesday, May 2 at the Sherring East Field in the city. The senior-varsity game goes at 5:30 p.m., with the junior-varsity game to follow at 6:45 p.m.