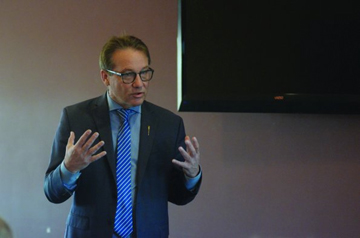 As a gesture of opposition to the NDP’s 2018 budget, UCP MLAs voted against the budget for the Ministry of Justice and Solicitor General, despite its inclusion of $10 million to fight rural crime, on April 19.
The vote was carried 42-16, with the Alberta Party joining the NDP in support.
Justice Minister Kathleen Ganley says she was “surprised” and “disappointed” by the conservatives’ decision to vote against funding they’ve long advocated for.
“There were a number of UCP members who were very vocal on this issue of rural crime,” she said.
“At the end of the day, we think it’s important to keep not only investing in those police services, but investing in a way that allows us to start transitioning to that more proactive model.”
Cypress-Medicine Hat MLA Drew Barnes, the UCP finance critic, says the vote was consistent with his party’s opposition to the provincial government’s fiscal approach.
“I voted against a government and a finance minister with a budget that’s already put us $60 billion in debt,” said Barnes.
“I never see these guys look for value with their spending. It’s always to them more and more money thrown at bigger and bigger government.”
That’s not to say the UCP opposes all funding measures in the budget, he added.
“Of course, there’s good spending in areas of what they’re doing, but the overall impact of what they’re doing is putting out next generation into debt.”
Just because a party votes against an entire budget, doesn’t mean they’re against every item, said Barnes.
“If I ended up just voting against health care, well of course there’s good spending in health care. If I end up voting against education, of course there’s good spending in education.”
The $10 million in funding for fighting rural crime offered by the NDP will go towards implementing its seven-point plan, which includes hiring more police officers and prosecutors, as well as enhancing co-ordination between the various law enforcement agencies.
Ganley said the ministry’s budget included funding for the hiring of an additional 20 rural officers, 13 new staff in bail hearing offices, 55 new court clerks to help clear backlogs, four new provincial court judges, and another 10 Crown prosecutors.
She described these funds as “over and above” what was included in the seven-point plan.
Barnes stressed that rural crime is a “huge, huge problem,” but blamed it on what he regards as the NDP’s fiscal mismanagement.
“It’s indicative of this government that they can’t protect their own people,” he said.
“Their debt and their interest … has put every single important priority at risk.
“We cannot continue down this path without caring for taxpayer dollars and expecting any of our good services to last.”
Barnes says the UCP has established its own rural crime task force, which will have specific policy recommendations in place by the time the writ drops for the 2019 election.
However, he hinted that the conservatives will advocate a more tough-on-crime approach.
“It’s about getting more value out of our current justice system. It’s about holding those who commit crimes more accountable. It’s about more office where they’re needed. It’s about different departments that are going to work closer together.”
Ganley said it’s vital for the government to invest in strengthening law enforcement, due to the strain that already exists on the justice system.
“What we have to bear in mind is we’re now in the post-Jordan era,” she said, referring to the Supreme Court decision that places an 18-month ceiling on the time between charges being laid and a trial in provincial court.
“We have to keep pace.”