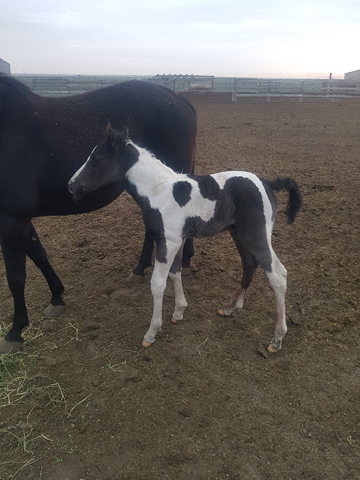 Photo courtesy of the Raymond RCMP A two-day-old foal was found dead near a rural property close to Welling last week after being reported missing.

The Raymond RCMP found a missing two-day-old foal dead near a rural property northeast of Welling.
Sometime during the early hours of May 2, an unknown suspect stole the black-and-white horse from the property, according to an RCMP news release.
“There is no indication that the horse was taken by animal predators,” the release said.
Cpl. Don Nelson says he’s currently unable to provide additional information, as the crime is still under investigation.
“We don’t have a lot of answers at this point,” he said.
However, Nelson did confirm that this sort of incident is uncommon and not part of a larger pattern.