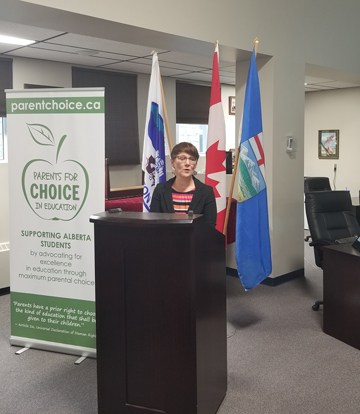 Westwind Weekly photos by Jeremy Appel Donna Trimble, executive director of Parents for Choice in Education, spoke in Cardston at an event organized by Joseph Schow, a UCP nomination candidate for the new Cardston-Siksika riding.

Joseph Schow, one of two candidates for the UCP nomination in the newly-formed Cardston-Siksika riding, hosted a talk by Parents for Choice in Education executive director Donna Trimble on May 31.
“School choice” supporters advocate increased public funding for charter and non-Catholic religious schools.
“In some circles we’re considered controversial,” said Trimble at the beginning of her lecture. “I always find that very, very surprising.”
Schow opened the event with a campaign speech-like introduction.
“The future success of our province depends on our ability to prepare the next generation to sit at the international-to-national table to be contributors, and that only comes from a robust education system,” said Schow.
“As conservatives, we believe that choice is the best option. Choice is great, both in the free market and education.
“Choice allows us to find the best product … As parents, we are in the best position to make this informed decision.”
Cardston-Taber-Warner UCP MLA Grant Hunter, who will be running in the new Taber-Warner riding in 2019, also spoke before the headlining speaker.
Trimble claimed that school choice is “fundamentally being targeted in Alberta today in three primary ways.”
The three attacks on it come through withholding funding, curriculum outcomes and the “manipulation of parental notification,” she said.

Trimble said increased funding for alternative schools is important, because it “means school choice options are accessible to Albertans across the province, regardless of income.”
She decried “increasingly aggressive attacks on this funding model,” which seeks to boost public schools at the expense of other forms of education, citing the Alberta Teachers Association and certain public school boards as the main culprits.
“I would strongly suggest that these public school boards that are pushing for the stripping of independent schools, figure out your own system and figure out how to balance your own books so no student is left behind,” Trimble said.

Trimble criticized the way Alberta schools use a centralized curriculum, which she claimed inhibit a wide array of teaching methods.
She provided Alberta’s dwindling math scores as an example.
“More than a decade of Alberta students have been left with insufficient math skills, because of an ill-conceived curriculum, which enforced the way teachers should teach mathematics, so the actual methodology, instead of prioritizing the outcomes,” she said.
This issue isn’t exclusive to public schools, as many Catholic and independent schools have suffered from the same issue, Trimble added.
She also said that centralized education runs the risk of the government “hijacking the curriculum to impose its ideological priorities on a captive audience of students.”
Trimble stressed that this is not an attack on any particular political party.
“This didn’t start with the NDP,” she said.
“The bottom line is if we have a central government-developed curriculum, there is a risk that the experts that are speaking to the people in government about how the curriculum should be written will fall for fads, and will push their ideological bent within the curriculum.”
As an example, she cited how some classrooms teach gender fluidity — the idea that gender and biological sex don’t always coincide — as fact.
Trimble said this discriminates against some students from religious upbringings who may not agree.
“This type of curriculum development is dangerous,” she said.

Trimble says she’s not opposed to gay-straight alliances in Alberta schools, but that parents ought to be informed of what activities their children are participating in, particularly if it’s of a religious or sexual nature.
“Extra-curricular clubs and associated activities are now by law also hidden under a cloak of secrecy,” she claimed, referring to Bills 10 and 24, which mandate that schools honour requests to establish GSAs and prevent schools from notifying parents of their children’s involvement, except under certain circumstances.
“Parents for Choice in Education has never been opposed to peer support groups or gay-straight alliances,” said Trimble.
“These groups can be very useful. There are some really great ones in the province.
“There are situations where these clubs are not what they are being described to parents as what they should be.”
Trimble said that a website linked to by the Alberta GSA Network on Facebook called “Fruit Loop” included graphic description of sexual practices.
According to the CBC, the page included articles discussing “kinky sex toys” and “super practical sex positions.”
The CBC also reported that the GSA Network took down these links after complaints from parents.
Another Facebook page, “MacEwan Sexual Health Club,” posted some graphic ads from The International HIV/AIDS Alliance that were aired on Channel 4 in the U.K., showing people having different types of sex.
The Edmonton-based club is no longer listed as a resource on the GSA Network website.
Trimble derided mandatory GSAs as “enforced speech,” as it compels faith-based schools to potentially go against their firmly-held convictions.
She also said that since LGBTQ youth have an increased risk of suicide, their participation in a GSA shouldn’t be kept from their parents.
“If your child for any other reason was at an increased risk of death, wouldn’t you want to know about it so that you could help?” she asked.
“Or would you be content allowing the school to offer supports in complete isolation?”