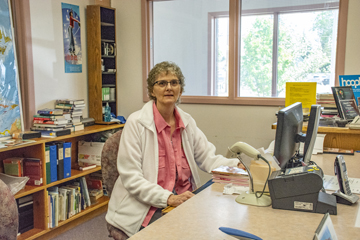 Magrath Public Library’s chief librarian Charlotte Lester worked her last day on June 15 after 17 years on the job.
Lester, 63, moved to Magrath from Oyen in December 1998 after her husband, a provincial wildlife officer, was transferred to the Cardston area.
She began working as a librarian in her new hometown in 2001.
“I was a librarian in Oyen for five years and when we transferred here, this position came up, so I applied,” said Lester.
The aspects of the job she says she’ll miss most are working with members of the community who come in to the library, as well as her co-workers.
“It’s working with the patrons, helping them whenever you can,” she said. “It’s good to see everybody get what they need and be helpful to them.
“I enjoy working with people who love books. It’s a good place to be.”
With her new-found free time, Lester plans on traveling and visiting her family, who live scattered throughout the province.
“I have one son, daughter and grandkids in Strathmore, a son, grandkids and daughter-in-law in Airdrie, and then I have a son in Edmonton,” said Lester.
She also intends on going camping and hiking with her husband, as well as spending time reading.
Lester is particularly fond of novelist James Patterson, who recently co-wrote “The President Is Missing” with former president Bill Clinton.
Although she’ll no longer be employed at the library, she does intend on spending time there in retirement.
“I can’t live without using the library,” Lester said. “It just has so many services and wonderful things.”