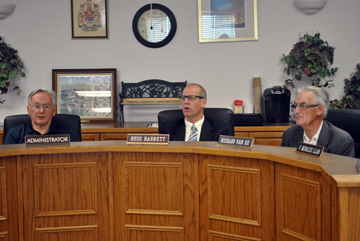 Council also voted to approve an estimate for storm drainage work to be done by MPE Engineering on 3 Street West in the upcoming months.
The grand total for the work is $247,000, which includes $148,000 for culvert replacement, $16,000 for driveway restoration, and $83,000 for ditch grading and restoration.
Mayor Russ Barnett noted that the town will only be paying a quarter of the costs for the project.
“It ties into the grant we received,” he said. “Seventy-five per cent of the costs are covered by the province.”
Coun. Richard Van Ee put forward the motion to approve the estimate, which was supported unanimously.

Coun. Brian Oliver put forward a motion to discuss some details of the tender package for the sale of Magrath’s golf course in committee, which was passed unanimously.
CAO Wade Alston said the town received a “wish list” from the golf club, which he ran past their lawyers before any sale is approved.
“It’s responding to the issues that they brought forward,” Alston said.
The next committee meeting is scheduled for June 20.