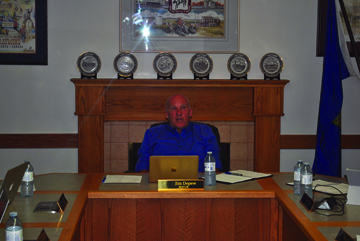 Raymond town council is considering bringing a temporary pop-up roundabout to Broadway to test its effectiveness, as part of its broader downtown revitalization.
“I think the pop-up would be just a nice trial,” said Coun. Joan Harker.
Council voted at its June 19 meeting to hold off on any decision regarding the roundabout until downtown development and community branding specialist Roger Brooks comes to Raymond on Sept. 3 to establish an assessment and development plan for the downtown area.
The motion put forward by Coun. Ralph Price to delay any roundabout plans until then passed unanimously.
Associated Engineering pegged the price for a single permanent roundabout at $300,000, but this number is based on a 2013 estimate.
According to the company’s presentation, roundabouts improve traffic flow, reduce congestion and improve sightlines.
There was some ambivalence on council about the usefulness of a permanent traffic circle.
“The last thing we want is to do something that would hurt any of our business,” said Harker at the June 19 meeting.
Mayor Jim Depew said that although he’s generally not in favour of roundabouts, he’s “in favour of bringing in a pop-up roundabout as an experiment.
“I could change my mind just by trying it.”
Coun. Ken Heggie was similarly open to a trial, but also skeptical of its long-term value.
“Everyone I’ve talked to says it’s a waste of money,” Heggie said, adding that the $300,000 could be better spent repairing roads, sidewalks and other local infrastructure.
“I’d be more interested in looking at it once all these other things are taken care of.”

The total cost for the Beautification Committee’s plan to bring four new benches to be placed around town is $4,558.08.
The benches are having walnut colour slating, with black ends and frame, according to the invoice provided to town administration.
The committee is looking for donors to help contribute to their cost.
“They’re trying to attract some people who will fund them,” Harker, who sits on the ad hoc committee, said, adding that families could purchase benches in honour of loved ones.