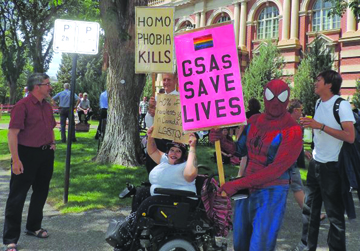 Southern Alberta Newspapers file photo Demonstrators wave to cars in front of the Medicine Hat court of Queen's Bench where an application for an injunction against implementing provinicially-mandated requirements for schools to host Gay Straight Alliances was rejected.

A request for an injunction to immediately stop Alberta’s gay-straight alliance law has been denied.
In a decision released on June 27, Court of Queen’s Bench Justice Johnna Kubik said “the effect on LGBTQ+ students in granting an injunction, which would result in both the loss of supportive GSAs in their schools and send the message that their diverse identities are less worthy of protection, would be considerably more harmful than temporarily limiting a parent’s right to know and make decisions about their child’s involvement in a GSA.”
The Justice Centre for Constitutional Freedoms issued a press release Wednesday stating they are considering appealing the decision, while Education Minister David Eggen said the ruling is a “win for justice and equality in the province of Alberta.”
The Justice Centre has represented multiple faith-based schools, parent-interest groups and individuals who wanted an injunction against Bill 24 until its constitutionality is ruled upon.
Bill 24 requires schools to allow GSAs if requested by students. The peer-support groups are meant to ensure LGBTQ+ students feel safe and welcome, while also preventing bullying.
One of the most contentious parts of the law is that parents cannot be notified of their child joining the GSA, unless the child consents.
Advocates and the provincial government argue this protects children whose parents would not be accepting of their sexual identity.
At a hearing on June 20 in Medicine Hat, the Justice Centre argued the law violates charter rights of parents, religious freedom, harms children and jeopardizes school funding and accreditation if schools don’t comply.
In her decision, Kubik said there is a serious constitutional issue to be heard about the competing charter rights of parents and children, but when other factors are weighed, an injunction should not be granted.
“I find that the applicants have failed to prove a degree of irreparable harm, which outweighs the public good in maintaining the legislation,” she said.
Kubik said there was no evidence sexually explicit materials ever came into the hands of any students through a GSA, nor that there’s a risk of this material being disseminated to students in GSAs, as is alleged by the Justice Centre.
The Justice Centre made submissions that two children were driven to suicidal thoughts after joining a GSA and being “convinced” they were transgender.
“These affidavits are largely hearsay in nature and I am unable to determine the reliability of these accounts, particularly in light of an absence of direct evidence from children or clear corroboration,” said Kubik, adding that the documents provided “raise more questions than they answer about how and why the child’s psychological distress developed.”
Kubik rejected testimony from two American doctors that GSAs cause harm, including one doctor’s testimony that transgenderism is a “delusional disorder.”
“The underlying factual premise of his opinion is not proven,” said Kubik, adding that his view is “in direct contradiction with the recommended and accepted diagnostic and treatment standards established by the American Psychiatric Association and American Academy of Pediatrics (and) it must be treated cautiously.”
The second doctor’s testimony had “no factual basis,” Kubik said, and failed to recognize the “legal reality in Alberta and Canada: concepts of gender identity and the right to freely express the same are not radical ideologies, promoted by activists. They are individual rights, recognized and protected by law.”
Kubik found that requirements of school boards to make attestations that they are following the regulations and publicly posting the policies doesn’t make them forsake their religious principles or teachings.
“It merely requires them to evidence their compliance with common public interest values, honour the Alberta Human Rights Act by not discriminating, treat people in accordance with Charter values, and publicly state that they will provide all students, including LGBTQ+ students, with a welcoming, caring, respectful and safe learning environment that respects diversity and fosters a sense of belonging,” she wrote.
Kubik found there to be “no evidence which demonstrates a real, concrete and unavoidable risk that the schools will lose funding or accreditation,” citing testimony from a government official of there being numerous “remedial and solutions-oriented steps between non-compliance and the loss of funding or accreditation.”