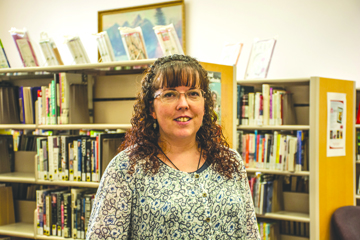 Stephanie Humphreys is the new chief librarian of the Magrath Public Library, taking over for Charlotte Lester after her retirement.
Humphreys, a former Westwind Weekly freelancer, began training with Lester on June 4, officially taking over on June 18.
“She really emphasized customer service, how important the community is, and how it’s not about books, it’s about keeping the community reading and engaged,” said Humphreys.
The library is slated to move into the school in the fall, so much of Humphreys time will be dedicated to the move.
“I have a lot of ideas and vision, especially now that the library’s being combined with the school, of how we can take it into the future and make it more interesting for more community members,” she said.
“In the next couple of months, our big focus is going to be on moving and how we’re going to move everything, and (figuring out) what we take and what we leave.
“How we’re going to work with the school to arrange the shelving and furniture to make it so it’s a shared space, that’s where a lot of our focus is going to be in the next six months.”
She’s also worked at the public library previously, from 2014 to 2015, but has much more responsibility now that she’s in charge.
“I’m still getting used to it,” said Humphreys. “There’s lots to learn.”
Humphreys, who in addition to Magrath has lived in Medicine Hat, Grassy Lake and Utah, worked as the school’s assistant librarian previously, as well as working part-time for Magrath-based Surex Insurance, which has offices across Canada.
“I just hope we’ll see lots of community members come in, especially as we move to the school,” she said.
In the meantime, the summer reading program is ongoing for elementary school children on every Tuesday and Thursday this month from 2-3 p.m.