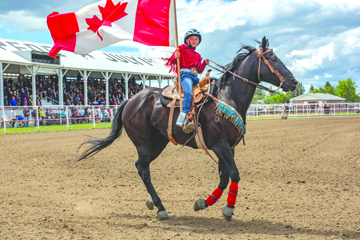 It’s rodeo season in southern Alberta.
The Town of Raymond hosted its 116th annual Canada Day Stampede, the oldest such event in the province, on June 30 and July 2.
The festivities included classic rodeo events, such as bull riding, bronc riding and steer wrangling.
Rodeo is a big deal in the Prairies, with the famous Calgary Stampede occurring July 6-15 and the Medicine Hat Stampede at the end of the month, but Raymond’s predates Calgary’s by a decade and the Hat’s by five years.
Dalin Atwood, the rodeo’s vice president, says the town pulls together to keep the stampede going as a means of preserving the town’s history.
“You see long-term families that are involved in the rodeo scene and our stampede here right now,” said Atwood.
“They want it, like myself, to be here for their grandkids and our grandkids, so we continue the history, we continue our rodeo.”
Atwood added that despite its age, the Raymond rodeo is growing, with 150 more participants this year than last.
Colin McNiven has been involved with rodeo for all 37 years of his life.
McNiven, who hails from the Brooks area originally, currently works as a pick-up man, protecting horses and stock.
“I was born on a ranch and grew up riding horses and doctoring cows,” he said.
“It’s a great way of life and a lot of fun.”
This is just his second year at the Raymond rodeo, which he described as “wonderful.”
Weston Davidson, a junior bullrider of two years, says the sport runs in his family.
His father was a bullrider himself, so Davidson “started following in his footsteps.”
He’s also been a steer rider for four years. His eventual goal is to become a rodeo star.
“Hopefully I’ll go pro when I’m older and good enough,” he said.

–With files from Allison Billings