Robinson hired as Raymond’s director of community and economic development 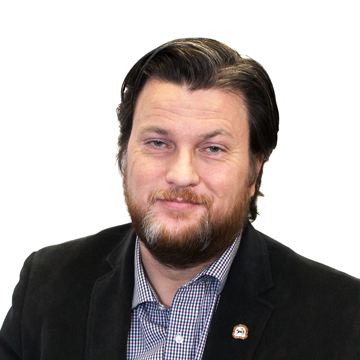 Photo courtesy of Town of Raymond Greg Robinson announced his resignation as a town councillor in a June 12 letter to council.

Greg Robinson, who resigned from Raymond town council on June 12 citing “personal reasons,” has been hired as the town’s new director of community and economic development.
He confirmed to the Westwind Weekly that he will begin the full-time position on July 9.
Robinson says the job has a “three-prong process” for attracting investment to Raymond.
The first prong involves working with community groups and “key stakeholders” to work on projects that “overlap” with the town’s vision.
Robinson cited the Chamber of Commerce and Beautification Committee as two examples of such stakeholders.
The other two components are economic development “to grow and strengthen our business core,” as well as working together with developers.
“It’s a bit of a hybrid role,” said Robinson.
He says there was no discussion of the position while he was on council.
“It was not appropriate for me to accept the position until I was ready to resign from council,” Robinson said, adding that he accepted the position “about a week or so” after stepping down.
In his letter of resignation, Robinson said he wanted to “be able to dedicate myself to my career, as well as meet the needs of my family.”
He says he’ll be able to do that with his new job.
“Previously, I had a career in a financial institution, as well as a councillor as a part-time job,” Robinson said. “So essentially, I’ll be now moving to just one job, instead of two jobs.”
His current job, where he works his last day on July 7, isn’t located in Raymond, so he had to spend a lot of time on the road.
“My commute right now with my current job is quite lengthy, so I spend an hour-and-a-half each day just driving to and from work.
“Eliminating all of those factors definitely is going to help me stay closer to home and not have all the extra duties on top of my own employment,” said Robinson.
The byelection to fill the vacant seat on council is scheduled for Sept. 10.
Potential candidates have until Aug. 10 to register.