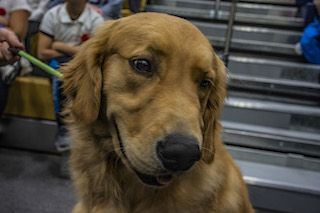 One fur baby is a nine-month old Golden Retriever named Rhapsody. The other four-legged friend is an Australian Shepard named Forte. Both canines are reading support dogs for school-aged children at Magrath Elementary School for a program called Paws 2 Read.

Paws 2 Read helper Susan Roberts is a dog trainer and has worked with special needs adults for 11 years. Currently, Roberts works with kids at the school that have troubles reading or have emotional issues and/or anxiety.

According to Roberts, she started the program at the school last December as a volunteer. This year, Roberts received a token gift from the school division. “I am hoping next year to be considered a teacher’s aide or something,” she noted, adding she works with eight kids per day from 8:30-11:50 a.m. Roberts’ children also attended the elementary school in Magrath.

Teachers at the school, Roberts explained, took the first month at the start of the school year to get to know students and decide which students might benefit from a supported reading program.

“I have a room at the school and as the children come in we have 20 minutes a day. In that 20 minutes, they will bring something to read or I have my own library of books. It’s a relaxed environment,” she said.

“There’s a lot of different physical things they can do in the room. If they struggle with certain words, I get my white board out and we start playing with different things to help them relax,” Roberts said.

During school events Roberts also attends with Rhapsody to socialize the young dog and according to Roberts — he loves it. And so do some of the students that struggle with sitting still or are anxious. “I will invite them to sit with us during events to help alleviate anxiety.”

As the students interact with the dogs, Roberts said, it is very interesting to watch.

“At first, they don’t really know what to expect. The longer we work with them, the more they relax,” she said.

Roberts said school Principal Brad Sabey has been amazingly supportive, in regards to the Paws 2 Read program, and it has been great having him on board. The program, Roberts explained, has operated throughout North America since the 1980s, but it hasn’t found a home in southern Alberta, until now.

“It’s been really great to see the children come on board and relax more and really embrace it. We have children who just like coming into school in the morning, because they can come and say hello to the dogs. That’s a way they relax just coming into school,” said Roberts.

Roberts said she believes Paws 2 Read has created many benefits for the students and has been a very positive experience.